Bats around our cottage 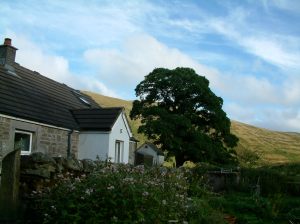 As the winter draws in, Autumn having not been the golden wonder this year, we know our local Bat population will be in a state of near hibernation.

Researching this topic, as I do each one I write about in this blog, I am shocked to learn that Wi-Fi is a threat to the survival of Bats. I suppose I ought to not be surprised. They depend on echolation to hunt their prey, and our modern array of SMART devices are hungry for multi media carrying frequencies. 4G is coming on stream next, and we are familiar with masts for 3G, sited on ridges along the Watershed. Even the Wi-Fi router in our house may upset the Bats when they fly around our cottage.

I used to think Bats were flying mice. They are not. They are mammals and more closely related to humans than they are to mice. They are of the order Chiroptera. They are not blind either, although do not have sharp visual acuity. They do have a good sense of smell. In flight they flap their spread-out digits, which are long and covered with a thin membrane. They have receptor cells which are concentrated in areas of the membrane where insects hit the wings when the bats capture them. It is flight which has enabled bats to become one of the most widely distributed groups of mammals.

Where they have been found in fossils, they have been dated from the early Eocene period, 52.5 million years ago as in Icaronycteris found in 1960. They are so delicate it is not easy to find their remains in fossils.

Bats in the UK eat only insects, and insect eating bats tend to be smaller than other types of bat found elsewhere in the world, the largest of which can be the size of a small dog,

At this time of year they have begun their periods of torpor which last longer as the sun’s warmth moves farther away. Some begin hibernation, using stored fat as fuel, in a cool quiet place, hoping they won’t be disturbed.

Their call, produced from their larynx or voice box, is known as echolocation. It is on a frequency beyond human hearing. Some scientists believe that echolocation was used by a common ancestor of all the bats that exist in the world today. Some bats do not use this ability to navigate and hunt, instead they use the sense of smell and vision. But UK Bats do use echolation. Bat echolocation is a perceptual system where ultrasonic sounds are emitted specifically to produce echoes. By comparing the outgoing pulse with the returning echoes, the brain and auditory nervous system can produce detailed images of the bat’s surroundings. This allows bats to detect, localize and even classify their prey in complete darkness. At 130 decibels in intensity, bat calls are some of the most intense, airborne animal sounds.

Bat ears are sensitive to the fluttering of moth wings, the sounds produced by tymbalate insects and the movement of ground-dwelling prey, such as centipedes, earwigs, etc. because of the ridges in their ears helping to sharply focus the echolocation signal.

Tiger moths produce ultrasonic signals to warn the bats they (the moths) are chemically protected or aposematic, whilst the moths Noctuidae have a hearing organ called a tympanum, which responds to an incoming bat signal by causing the moth’s flight muscles to twitch erratically, sending the moth into random evasive maneuvers.

The small greater horseshoe bats and lesser horseshoe bats, which live in the UK are genetically more closely related to the families of fruit bats. There are at least nine species of bat to be found in Scotland whereas the United States is home to an estimated 45 to 48 species. The most numerous and familiar of the nine species in Scotland are pipistrelles, which can be seen flitting about near woodland or open water at dusk, in search of midges and other flying insects. A single pipistrelle can consume up to 3,000 midges in one night! I think it is the pipistrelles which populate our banks and burn, with moorland and forests to create a good source of insects. As someone who gets badly bitten by midges, living by water and woodland as we do, I welcome the strenuous hunting by night of the bats flying in crowds around our cottage. The swallows and house martins do their bit for me during the warm summer days. Thus by hunting at night, they are not in competition with birds, and travel large distances of up to 800 km in their search for food.

Bat roosts can be found in hollows, crevices, foliage, and even human-made structures, and include “tents” the bats construct by biting leaves. The conditions must meet the bats’ social and reproductive requirements. Most years we see them in their social groups but we are not sure where the maternity roosts are located. Maternity roosts are set up late May to early June for the adult female bats to give birth and rear their babies. Female bats nurse their young until they are nearly adult size, because a young bat cannot forage on its own until its wings are fully developed. As soon as the young start to fly these maternity colonies begin to break up and the bats move to other roosts.

We don’t know enough about our bat population. They may not be breeding here, merely passing by in colonies to eat. Any major disruption during the summer breeding site could potentially wipe out all the females from the area. The male bats typically prefer to live alone or in small groups in cooler sites. During late summer male bats set up territories around a mating roost, to which they attract females. We can’t say whether we have male or females, or if breeding has been going on. But we do see plenty of bats most years. This year, due to it being exceptionally wet and often unseasonal frosty weather we have not seen so many. Bats rarely fly in rain, as the rain interferes with their echolocation, and they are unable to locate their food. It has therefore been a bad year for their survival chances here in the Scottish Borders. Hopefully they found better conditions elsewhere in the UK.

Some bats only live in large woodlands, and a large forest within view of our cottage was felled a couple of winters ago displacing much wildlife. Perhaps we get fewer bats due to that catastrophic event.

Bats are pest controllers eating thousands of insects every night. They suffer if pesticides kill off insects which they would have fed on, so I do not use pesticides of any kind. One of the downsides for food supply is when farmers make hay into silage and that kills larval insects resulting in less flying adults available.

Bats drink by skimming the surface of a body of water, and lowering its jaw to get just one drop of water. They then skims again to get a second drop of water, and so on, until they have had enough. Its precision and control is very fine, and it almost never misses. They do this over our burn, catching water and the many insects which hover there too.

A couple of National Trust properties in the south west of Scotland have identified seven species at Threave and eight at Culzean . The former is known to support at roosts of two Scottish rarities – noctule and whiskered bat. The latter supports all but one of the nine species that regularly occur in Scotland.

But there are continuing signs of a decrease in bat numbers as natural habitats such as hedgerows, woodlands and ponds have been declining and fragmenting.

Bats are under threat from building and development work that affects roosts, loss of habitat, the severing of commuting routes by roads and threats in the home including cat attacks, flypaper and some chemical treatments of building materials. Other potential threats include lighting, radio waves from Wi-Fi or mobile phone masts.

Wind turbines have been the likely cause of deaths of bats too. Evidence suggests barotrauma is causing bat fatalities around wind farms. The lungs of bats are typical mammalian lungs, and unlike the lungs of birds, they are thought to be more sensitive to sudden air pressure changes in their immediate vicinity, such as near wind turbines, and are more liable to rupture. Bats suffer a higher death rate than birds in the neighborhood of wind turbines. Since there are no signs of external trauma, the cause has been hypothesized to be a greater sensitivity to sudden pressure fluctuations in the mammalian lung than in that of birds. In addition, it has been suggested that bats are attracted to these structures, perhaps seeking roosts, and thereby increasing the death rate.

We are fighting against a massive windfarm being built along the wild area of the high fells close to where we live. But the final decision is probably going to rest with the Ministry of Defence and the Eskdalemuir Listening Station, than to our cries of protest to protect the wild landscape.

Retired, living in the Scottish Borders after living most of my life in cities in England. I can now indulge my interest in all aspects of living close to nature in a wild landscape. I live on what was once the Iapetus Ocean which took millions of years to travel from the Southern Hemisphere to here in the Northern Hemisphere. That set me thinking and questioning and seeking answers. In 1998 I co-wrote Millennium Countdown (US)/ A Business Guide to the Year 2000 (UK) see https://www.abebooks.co.uk/products/isbn/9780749427917
View all posts by borderslynn →
This entry was posted in anthropocene and tagged climate, wildlife. Bookmark the permalink.