Raining In My Heart

We have enjoyed some glorious hot days since the beginning of the month. The Met Office have warned that may have constituted our Summer for 2013. Certainly, as the jet stream gave us our coldest spring for 50 years, it is set (starting today) to give us high winds, wet and windy weather into August. The jet stream usually flows north of Britain, but we are feeling the consequences of it being trapped here, in the Scottish Borders today, Friday, 14th June, 2013. The wind is bringing temperatures down to 4 degrees celsius chill factor. Our pair of swallows nesting in the small generator shed will be safe from the brunt of the weather, but will they find sufficient food for themselves and their brood before they fly back to Africa? But, they made it last year and came back to us again. Fingers crossed for these wonderful birds.

One success has been a rabbit producing a litter using our insulated wall cavity. She dug her way in underground, then upward, so her young could be kept warm during our cold Spring. We could hear them relating contentedly (a gentle, squeaking sort of sound – even a bit of a cat like purr) whenever she arrived with food (usually mornings and evenings). At times there was such a clatter and fuss, they sounded more like elephants than rabbits. Recently, she led them outside and we could hear them leave, all sounding pleased to be off. I wished them well but know they may soon become an important source of prey for the local buzzards and foxes. We all know rabbits do breed well and it is estimated there are around 9.5 million in Scotland. As the mother rabbit could be pregnant within 24 hours of giving birth, I do hope our recently resident rabbit has found another place to burrow into to have her next brood. Certainly, the wall is currently silent.

If the weather stays as wintry as today, at least the biting midges will be less aggressive. However, I am conscious that the clouds of midges we have had to suffer the past few days have provided essential food for many creatures. The butterflies were already decimated after last years bad weather (thank you jet stream, yet again, for becoming an almost permanent feature). I have only seen a range of white butterflies since the warmer weather began, plus some small day flying moths. Plenty of garden bees and other flying insects – but now what will they do? The rain is pouring heavily down as I write this, and I note the nesting pair of swallows active around the cottage.

Last of the water in the sun dried ditch

The drought (for it was that) lasted long enough to dry up ditches where frogs had optimistically laid their spawn. I watched hundreds die and there was no way I could help them, I was too far from any running water where they were lying gasping their last breath. This heavy rain will resuscitate those tadpoles in sufficient remaining mud and all will not be lost for these determined critters.

The cuckoo flower, tormentil, bluebell, sweet cicily, vetch, dandelion, primrose, celandine, water avens, wild violets – all fill the landscape on my regular walks. But I will not be walking today, I am not a masochist.

Spears of foxglove pierce through the vegetation 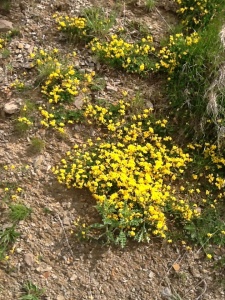 Carpet of vetch on the sandy slopes

Bird song has been wonderful as territory was gained and nesting began in earnest. We have blue tits in our nesting box on the ash tree by the burn. That is good and strong and brought the young through last year, despite appalling weather conditions. The cottage garden plants are thick and lush and many insects will find safety therein. The soil is full of life too, which I noticed whilst doing extensive hand weeding.

Bright flowers of vetch and tormentil adorn the rocks 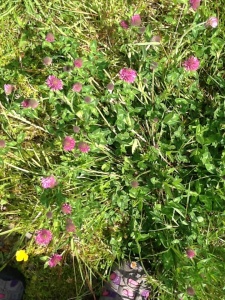 I sometimes use my iPod app to check I have identified a bird correctly, listening to its song to match against what I am hearing. A Warden at a UK reserve has alerted us to being careful how we use this educational tool. Apparently, if you play the sound when a bird is resting, for example, a night jar, because you want it to appear during the day for you to take a photograph, you may cause it such distress it will desert its nest and thus lead to a decline in the bird population. This makes me much more careful of playing bird song outside.

The National Farmers Union reported wheat harvests are likely to be down around 30 percent compared with last year and beekeepers have reported a similar third decline as honeybee colonies were killed off in the severe weather of last year. Today the Met Office declared it is to hold an “unprecedented meeting of experts next week to try and work out the cause of unseasonal weather in recent years”.

When we first came here, a few years ago now, the fells were full of sheep and cattle. They have all been sold off and now we have a smattering of sheep nearby. I used to hear very little birdsong, and no blue feathered birds visited us. Since the fells have been planted with trees, and I have planted what was once a small field into a cottage garden, we get a wider variety of birds visiting, and nesting, nearby. Bernie Krause earned a standing ovation at the annual TED Global Conference ( this time held in Edinburgh) for his presentation of wildlife recordings. He is a musician and also chose to take a doctorate in bioacoustics. He has now made amazing recordings over the past 40 years from various parts of our planet, and has revealed the importance of the voices of the natural world. He has one recording which was of a woodland and meadow, untouched by humans, then a recording after thinning of the forest had been carried out. He went back year after year for 15 years. The pre-logging time was a deafening dawn chorus, post logging was about half the density of sound, until, after 15 years, there is no dawn chorus there. I am not sure what recovery is taking place around our home, as all man made changes, even well intentioned, are not always for the good of the environment.

One thing that is good is that the rain is falling after a drought. The fells are greening and vegetation is growing. We just don’t want it to be cold and windy too!

Retired, living in the Scottish Borders after living most of my life in cities in England. I can now indulge my interest in all aspects of living close to nature in a wild landscape. I live on what was once the Iapetus Ocean which took millions of years to travel from the Southern Hemisphere to here in the Northern Hemisphere. That set me thinking and questioning and seeking answers. In 1998 I co-wrote Millennium Countdown (US)/ A Business Guide to the Year 2000 (UK) see https://www.abebooks.co.uk/products/isbn/9780749427917
View all posts by borderslynn →
This entry was posted in anthropocene and tagged birds, Farming, forestry techniques, jet stream, rabbits, Weather, wildflowers. Bookmark the permalink.