In 570c, a boy called Muhammad, was born in the Arabian city of Mecca.

In Eastern Europe there were migrations of nomadic peoples and major changes were taking place as the Byzantine Empire fought for retention of its borders.

Prior to Muhammed’s birth, one of the nomadic tribes in Eastern Europe was expanding its territories and growing in number, and becoming a problem for the Byzantine Empire. These were the Avars. Map of lands conquered by Avars

In 557 the Avars sent an embassy to Constantinople, marking their first contact with the Byzantine Empire—presumably from the northern Caucasus. In exchange for gold, they agreed to subjugate the “unruly gentes” on behalf of the Byzantines. They conquered and incorporated various nomadic tribes—Kutrigurs and Sabirs—and defeated the Antes. By 562 the Avars controlled the lower Danube basin and the steppes north of the Black Sea. By the time they arrived in the Balkans, the Avars formed a heterogeneous group of about 20,000 horsemen. After the Byzantine Emperor Justinian I (reigned 527–565) bought them off, they pushed northwestwards into Germania. However, Frankish opposition halted the Avars’ expansion in that direction.

Then there were the Lombards.

These were a Germanic people who ruled large parts of the Italian Peninsula from 568 to 774.

The Lombard historian Paul the Deacon wrote in the Historia Langobardorum that the Lombards descended from a small tribe called the Winnili, who dwelt in southern Scandinavia (Scadanan) before migrating to seek new lands. In the 1st century AD, they formed part of the Suebi, in northwestern Germany. By the end of the 5th century, they had moved into the area roughly coinciding with modern Austria north of the Danube river, where they subdued the Heruls and later fought frequent wars with the Gepids. The Lombard king Audoin defeated the Gepid leader Thurisind in 551 or 552; his successor Alboin eventually destroyed the Gepids at the Battle of Asfeld in 567.

Following this victory, Alboin decided to lead his people to Italy, which had become severely depopulated and devastated after the long Gothic War (535–554) between the Byzantine Empire and the Ostrogothic Kingdom there. The Lombards were joined by numerous Saxons, Heruls, Gepids, Bulgars, Thuringians, and Ostrogoths, and their invasion of Italy was almost unopposed. By late 569 they had conquered all north of Italy and the principal cities north of the Po River except Pavia, which fell in 572. At the same time, they occupied areas in central Italy and southern Italy. They established a Lombard Kingdom in north and central Italy, later named Regnum Italicum (“Kingdom of Italy”), which reached its zenith under the 8th-century ruler Liutprand.

Meanwhile, Justin II became Emperor of The Byzantine Empire in 565, and he promoted his close friend, a Thrace born man,Tiberius to the position of Comes excubitorum, which he held from approximately 565 through to 574.

In 569, he appointed Tiberius to the post of Magister utriusque militiae with instructions to deal with the Avars and their demands. After a series of negotiations, Tiberius agreed to allow the Avars to settle on Roman territory in the Balkans in exchange for male hostages taken from various Avar chiefs. Justin, however, rejected this agreement, insisting on taking hostages from the family of the Avar Khan himself. This condition was rejected by the Avars, so Tiberius mobilized for war. In 570 he defeated an Avar army in Thrace and returned to Constantinople. While attempting to follow up this victory, however, in late 570 or early 571 Tiberius was defeated in a subsequent battle where he narrowly escaped death as the army was fleeing the battlefield. Agreeing to a truce, Tiberius provided an escort to the Avar envoys to discuss the terms of a treaty with Justin. On their return, the Avar envoys were attacked and robbed by local tribesmen, prompting them to appeal to Tiberius for help. He tracked down the group responsible and returned the stolen goods.

Due to illness, Justin made Tiberius Caesar.

Tiberius negotiated a truce with the Avars, paying them 80,000 nomismata per year, for which the Avars agreed to defend the Danube frontier, thereby allowing Tiberius to transfer troops across to the east for a planned renewal of the conflict against the Persians.

In 575 Tiberius began moving the armies of Thrace and Illyricum to the eastern provinces. Buying time to make the necessary preparations, he agreed to a three-year truce with the Persians, paying 30,000 nomismata, though the truce excluded action in the region around Armenia. Not content with making preparations, Tiberius also used this period to send reinforcements to Italy under the command of Baduarius with orders to stem the Lombard invasion. He saved Rome from the Lombards and allied the Empire with Childebert II, the King of the Franks, in order to defeat them. Unfortunately, Baduarius was defeated and killed in 576, allowing even more imperial territory in Italy to slip away. Tiberius was unable to respond as the Persian Sassanid Emperor Khosrau I struck at the Empire’s Armenian provinces in 576, sacking Melitene and Sebastea. Shifting his attention eastward, Tiberius sent his general Justinian with the eastern armies to push the Persians back across the Euphrates. The Byzantines followed, and pushed deep into Persian territory, culminating in a raid on Atropatene. In 577, however, Justinian was defeated in Persian Armenia, forcing a Byzantine withdrawal. In response to this defeat, Tiberius replaced Justinian with the future emperor Maurice. During the truce which Tiberius concluded with Khosrau, he busily enhanced the army of the east, not only with transfers from his western armies but also through barbarian recruits, which he formed into a new Foederati unit, amounting to some 15,000 troops by the end of his reign.

As mentioned above, the Persian Khosrow (Khosrau) I was the twenty-second Sasanian Emperor of Persia, and one of its most celebrated emperors. 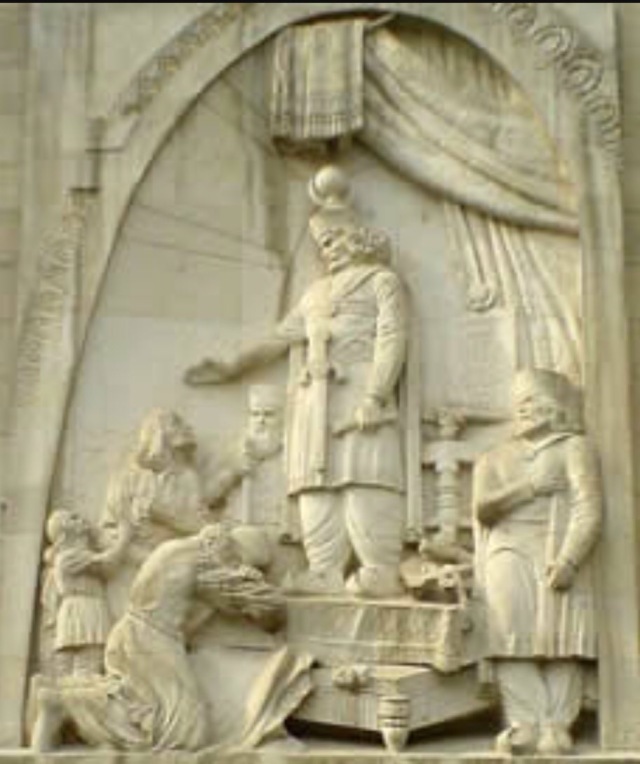 He laid the foundations of many cities and opulent palaces, and oversaw the repair of trade roads as well as the building of numerous bridges and dams. His reign is furthermore marked by the numerous wars fought against the Sassanid’s neighboring archrivals, the Roman-Byzantine Empire, as part of the already centuries-long lasting Roman-Persian Wars. The most important wars under his reign were the Lazic War which was fought over Colchis (western Georgia-Abkhazia) and the Byzantine–Sasanian War of 572–591. During Khosrow’s ambitious reign, art and science flourished in Persia and the Sasanian Empire reached its peak of glory and prosperity. His rule was preceded by his father’s and succeeded by Hormizd IV. Khosrow Anushiruwan is one of the most popular emperors in Iranian culture and literature and, outside of Iran, his name became, like that of Caesar in the history of Rome, a designation of the Sasanian kings. He died in 579.
In late 577, Maurice, bodyguard to Tiberius, despite a complete lack of military experience, was named as magister militum per Orientem, effectively commander-in-chief of the Byzantine army in the East, in the ongoing war against Sassanid Persia, succeeding the general Justinian. At about the same time, he was raised to the rank of patricius. He scored a decisive victory against the Persians in 581. In 582 he became the next Caesar.

And during these years when battles raged far from him, little Muhammed, orphaned and raised under the care of his paternal uncle Abu Talib, would seclude himself in a mountain cave named Hira for several nights of prayer.

Retired, living in the Scottish Borders after living most of my life in cities in England. I can now indulge my interest in all aspects of living close to nature in a wild landscape. I live on what was once the Iapetus Ocean which took millions of years to travel from the Southern Hemisphere to here in the Northern Hemisphere. That set me thinking and questioning and seeking answers. In 1998 I co-wrote Millennium Countdown (US)/ A Business Guide to the Year 2000 (UK) see https://www.abebooks.co.uk/products/isbn/9780749427917
View all posts by borderslynn →
This entry was posted in anthropocene and tagged 6th century, 7th century, Avars, Byzantine Empire, Caesar, Jerusalem, Justin II, Khosrow, Lombards, Maurice, Middle Ages, muhammed, Persia, Romania, Sassanid, Thrace, Tiberius. Bookmark the permalink.