Flooding in the Americas: Neolithic farming

Posted on December 3, 2017 by borderslynn

Starting about 12,900 years ago, the Northern Hemisphere was abruptly gripped by centuries of cold, as mentioned in previous blogs, the Younger Dryas. Scientists have suggested this chill helped wipe out most of the large mammals in North America as well as the so-called Clovis people.

There must have been so many events which destroyed emerging human cultures, leaving little, if any, trace of their existence.

Mighty floods, such as the Noah’s Arc tale, are described anecdotally throughout the world, by most diverse cultures. The stories are similar: few survivors remain to begin human existence once more after the flood.

The source of one such flood was apparently the glacial Lake Agassiz, (see http://www.macroevolution.net/lake-agassiz.html) located along the southern margin of the Laurentide Ice Sheet, which at its maximum 21,000 years ago was 6,500 to 9,800 feet (2,000 to 3,000 meters) thick and covered much of North America, from the Arctic Ocean south to Seattle and New York.

“The flood was likely caused by the sudden breaking of an ice dam,” said researcher Alan Condron, a physical oceanographer at the University of Massachusetts at Amherst. “Prior to the flood, meltwater is thought to have drained into the Gulf of Mexico, down the Mississippi River. After the dam broke, the water rapidly flowed into the ocean via a different river drainage system.” (See https://www.livescience.com/29625-seven-ways-the-earth-changes-in-the-blink-of-an-eye-100809html.html)

Some scientists recently suggested this meltwater may have flooded into the Arctic Ocean via the Mackenzie Valley about 2,500 miles (4,000 kilometers) northwest of the St. Lawrence outlet.

Floods occur regularly all over the world. They may not disrupt the Atlantic Meridional Overturning Circulation, as in this pouring of freshwater into the oceans, but they cause terrible destruction.

There is a precious area of land, known as the American Bottom which is part of the Mississippi Flyway used by migrating birds and has the greatest concentration of bird species in Illinois. The flood plain is bounded on the east by a nearly continuous, 200–300 foot high, 80-mile (130 km) long bluff of limestone and dolomite, above which begins the great prairie that covers most of the state. The Mississippi River bounds the Bottom on its west, and the river abuts the bluffline on the Missouri side. Portions of St. Clair, Madison, Monroe, and Randolph counties are in the American Bottom. Its maximum width is about 9 miles (14 km) in the north, and it is about 2–3 miles in width throughout most of its southern extent.

24 years ago, the Great Flood of 1993 hit major portions of the southern Bottom. 47,000 acres (190 km²) of land below Columbia, Illinois was inundated, destroying the town of Valmeyer.

The waters came within five feet of overtopping the East Saint Louis levee. If they had run over, they would have flooded 71,000 acres (290 km²) and destroyed this urban industrial area. More than nine feet of floodwater covered the town of Kaskaskia in 1993 after it overtopped the levee; only the spire of the Catholic church and roof of a nearby shrine rose far above the waters.

Like the Mississippians, Americans made massive changes in the floodplain; their development has reduced its ability to absorb floods. The destruction of wetlands and paving over of areas along all the major rivers has increased the severity of flooding over the decades, despite attempted engineering solutions for flood control, which in turn have exacerbated flooding.

Pockets of humans around the world, from about 10,000–7000 years ago (8000–5000 BC), began to apply their growing brains to solve food supply issues. This has been classified as The Neolithic revolution. Agriculture forever changed the interaction between humans and the world around them. This was highly beneficial to their survival, but also has become such a science that the harmful effects can now be catalogued.

Around 7000 years ago an incredibly important food stuff was developed. It was Maize.
Image of Maize Development 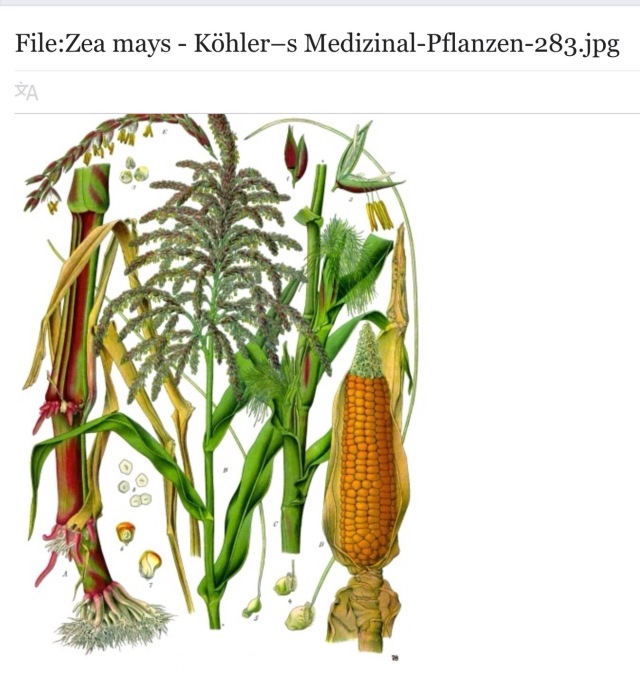 It was thought that early farmers noticed a wild grass (Teosinte) originally growing in Central America, which led to them developing maize. In 1949, a bright young archaeologist who had just completed his PhD, Richard MacNeish, while working in the Sierra de Tamaulipas, Mexico, discovered primitive teosinte corncobs in context with human habitations dating back several thousand years. This has led to major understanding and pursuit of knowledge as to the human development of agricultural practices.

Recent research this century indicate the Balsas River Valley of south-central Mexico as the center of domestication of these tiny corn cobs. Before domestication, maize plants grew only small, 25 millimetres (1 in) long corn cobs, and only one per plant. In Spielvogel’s view, many centuries of artificial selection by the indigenous people of the Americas resulted in the development of maize plants capable of growing several cobs per plant, which were usually several centimetres/inches long each. The Olmec and Maya cultivated maize in numerous varieties throughout Mesoamerica; they cooked, ground and processed it through nixtamalization. It was believed that beginning about 2500 BC, the crop spread through much of the Americas. Research of the 21st century has established even earlier dates. The region developed a trade network based on surplus and varieties of maize crops.

Hundreds of years later, now in North America,  one concentrated group of farmers centred their maize farming in, what we now call Cahokia; they had learned to grow maize so successfully they could support large communities.

‘Cahokia, situated north of the Rio Grande, was a huge collection of farmers packed cheek by jowl. It had few specialized craftworkers and no middle-class merchants. The total number was about 15,000 people. They were of the Mississippian culture, known as the Mound Builders. They lived around between 950 to 1250 AD. Most of the area has clayey soil that is hard to till and prone to floods. Cahokia was located next to the largest stretch of good farmland in the entire American Bottom. At its far edge, a forest of oak and hickory topped a line of bluffs. The area was little settled until as late as 600 A.D., when people trickled in and formed small villages, groups of a few hundred who planted gardens and boated up and down the Mississippi to other villages……..extract from ‘1491: The Americas before Columbus’.

Through their expert cultivation of maize they were able to create food surpluses and build concentrated settlements in the centuries after 600 CE. The Cahokia Mounds Site, which was built as the center attracted a rapid increase in population after 1000 CE. It is a six-square mile complex of large, man-made, earthen mounds rising from the flood plain. Despite using the local clay they engineered a method of building which supported the higher structures, working with water and clay to retain the mounds. In 1982, the Mound Site was designated by UNESCO as one of only eight World Heritage Sites in the United States……..but how much longer will such sites be preserved and protected?

President Trump has withdrawn from UNESCO’s activities: “UNESCO’s mission is to contribute to the building of peace, the eradication of poverty, sustainable development and intercultural dialogue through education, the sciences, culture, communication and information.” The White House gave a statement: “This decision was not taken lightly, and reflects US concerns with mounting arrears at UNESCO, the need for fundamental reform in the organisation, and continuing anti-Israel bias at UNESCO.”

Despite their brilliant engineering skills, leaving us these amazing mounds to study and admire, the Cahokian leaders also got too ambitious with their building activities.

“Cahokia’s rulers were setting themselves up for future trouble. By mining the forests upstream for firewood and floating the logs downriver to the city, they were removing ground cover and increasing the likelihood of catastrophic floods. When these came, as they later did, kings who gained their legitimacy from their claims to control the weather would face angry questioning from their subjects.”

Cahokia declined and was lost due to flooding.

Humans seem to carry this flaw of sticking too long with a ‘good thing’ ….never seeing our resources are finite, and that by robbing one area will inflict damage on another. We get out of balance so easily and do not take into account how this wonderful planet will tip off balance if we do not respect her. Sometimes she tips off balance without our help! As when mighty asteroids hit (see previous blog) but we cannot afford to take risks with the fragile balance we all need for our survival.

Understanding where we have gone wrong in our misuse of flood plains is only now dawning on us in retrospect. Now we must plan our urban sprawl with nature in mind. See http://www.baca.uk.com/research

Retired, living in the Scottish Borders after living most of my life in cities in England. I can now indulge my interest in all aspects of living close to nature in a wild landscape. I live on what was once the Iapetus Ocean which took millions of years to travel from the Southern Hemisphere to here in the Northern Hemisphere. That set me thinking and questioning and seeking answers. In 1998 I co-wrote Millennium Countdown (US)/ A Business Guide to the Year 2000 (UK) see https://www.abebooks.co.uk/products/isbn/9780749427917
View all posts by borderslynn →
This entry was posted in Uncategorized and tagged agriculture, cahokia, corn, Farming, flood plains, flood protection, maize, mesoamerica, mississippi, staple diet, UNESCO. Bookmark the permalink.