Wildlife of Africa and the links to wildlife of South America

When South America split from Africa (see previous blog) it became, for much of the past 130 million years, an island continent, and on it organisms evolved in “splendid isolation.” Mammals, especially, evolved into forms not seen anywhere else.

The land mass of Africa is the only place still teeming with a diverse mixture of megafauna today, being the likely birthing place of all life forms, the centrepiece of Gondwana.

Whilst megafauna may have become extinct in South America, it remains one of the most biodiverse continents on earth. It is home to many interesting and unique species of animals including the llama, anaconda, piranha, jaguar, vicuña, and tapir. The Amazon rainforests possess high biodiversity, containing a major proportion of the Earth’s species. It is vital these are now protected from corporate activities which have plundered this continent for too long, committing ecocide crimes to satisfy our western greed. For example, the tapir is hunted and its habitat is being destroyed – see https://www.bioexpedition.com/tapir/

When Gondwana broke into other land masses which moved away from the continent of Africa, they moved into areas within the oceans which were often beset by extreme climate change. For example, “during the the last Ice Age, Australia, Tasmania and New Guinea formed a single landmass, called Sahul. It was a strange and often hostile place populated by a bizarre cast of giant animals” – see ‘Climate change helped kill off super-sized Ice Age animals in Australia’, David Salisbury Jan. 26, 2017)

The ancestors of the American Smilodon and scimitar cat lived in Africa as the now extinct wolf sized, blade-toothed dogs and sabre-toothed cats such as Megantereon and Homotherium.

Megantereon was a genus of prehistoric machairodontine saber-toothed cat that lived in North America, Eurasia, and Africa. It may have been the ancestor of Smilodon.

At the end of the Pliocene the Meganteron evolved into the larger Smilodon in North America, while it survived in the Old World until the middle Pleistocene. The youngest remains of Megantereon from east Africa are about 1.5 million years old. In southern Africa, the genus is recorded from Elandsfontein, a site dated to around 700,000-400,000 years old. Remains from Untermaßfeld show that Megantereon lived until 900,000 years ago in Europe. In Asia,it may have survived until 500,000 years ago, as it is recorded together with Homo erectus at the famous site of Zhoukoudian in China. The only full skeleton was found in Senéze, France.

Indeed the Smilodon roamed the extent of South America, a fearsome creature.

In Latin America, during the Early Pliocene through the end of the Pleistocene, there existed a giant ground sloth, a Megathereum Americanum. Megatherium was first discovered in 1788 on the bank of the Luján River in Argentina, the holotype specimen was then shipped to Spain the following year wherein it caught the attention of the esteemed paleontologist Georges Cuvier, Cuvier was the first to determine that Megatherium was a sloth. 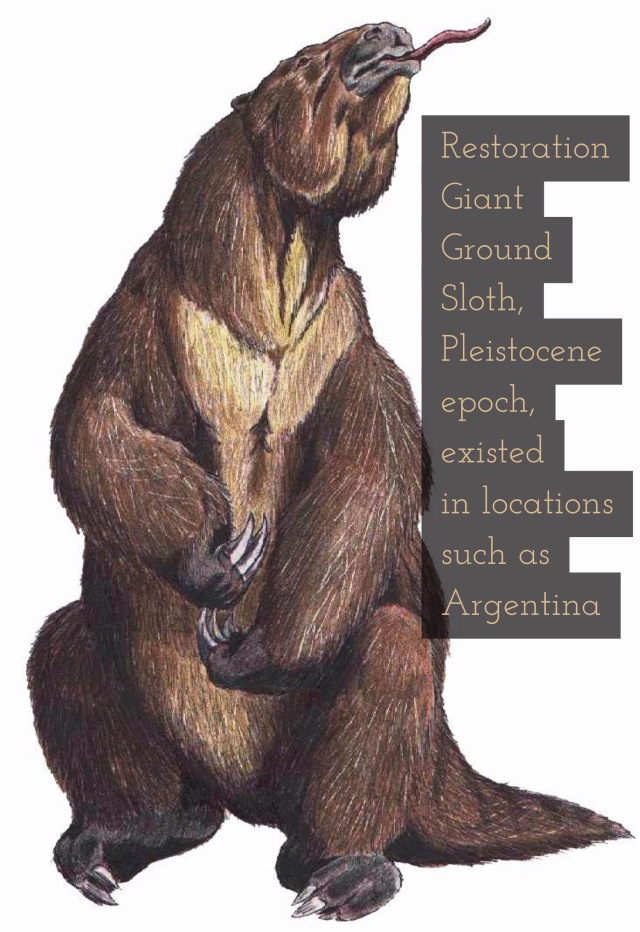 Due to growing aridity it could no longer survive in limited habitat. As humans evolved in the same area, they would find this great beast vulnerable and easier to hunt and kill. So it became extinct.

The sloths which now exist are also in peril and some attempts are being made to save them.

Only a few other land mammals equaled or exceeded Megatherium in size, such as large proboscideans (e.g., elephants) and the giant rhinoceros Paraceratherium.

The elephants of Africa are well known to us, though difficult to protect from greedy ivory hunters in these days of organised wildlife crime. But elephants once roamed the Americas.

Gomphoetheres  were widespread in North America during the Miocene and Pliocene epochs, 12–1.6 million years ago. Some lived in parts of Eurasia, Beringia, and in South America following the Great American Interchange.

“Certainly, the Gomphotheres, a diverse group of elephant-like animals (proboscideans) were not only widespread in North America during the Miocene and Pliocene epochs, with some living in Eurasia and South America, they were slowly replaced by modern elephants, but the last South American species did not finally become extinct until possibly as recently as 400 A.D. In the toxonomy of the Gomphotherium, the complete “parentage” was finally decided in 1998 from Domain to Family. According to J. L. Prado, M. T. Alberdi, b. Azanza, B. Sanchex, and D. Frassinetti in their 2005 work on elephants in South America, the Gomphothere remains are common at South American Paleo-indian sites. One example is the early human settlement at Monte Verde, in Chile.

Consequently, elephants were widely distributed all over South America, with at least one variety existing to about the time of the annihilation of the Nephites, 400 A.D.”

Diagram from the above blog:

“Gomphothere remains are common at South American Paleo-indian sites. Examples include the early human settlement at Monte Verde, Chile, dating to approximately 14,000 years ago, and the Altiplano Cundiboyacense (Tibitó, 11,740 BP) and the Valle del Magdalena of Colombia. In 2011, remains dating between 10,600 and 11,600 years ago were also found in the El Fin del Mundo(End of the World) site in Sonora, Mexico’s Clovis location – the first time such an association was found in a northern part of the continent where gomphotheres had been thought to have gone extinct 30,000 years ago. In July 2014, it was announced that the “position and proximity of Clovis weapon fragments relative to the gomphothere bones at the site suggest that humans did in fact kill the two animals there. Of the seven Clovis points found at the site, four were in place among the bones, including one with bone and teeth fragments above and below. The other three points had clearly eroded away from the bone bed and were found scattered nearby.”

Today the magnificent elephant of Africa die under attack from war weapons mounted on helicopters in a mass slaughter.

Retired, living in the Scottish Borders after living most of my life in cities in England. I can now indulge my interest in all aspects of living close to nature in a wild landscape. I live on what was once the Iapetus Ocean which took millions of years to travel from the Southern Hemisphere to here in the Northern Hemisphere. That set me thinking and questioning and seeking answers. In 1998 I co-wrote Millennium Countdown (US)/ A Business Guide to the Year 2000 (UK) see https://www.abebooks.co.uk/products/isbn/9780749427917
View all posts by borderslynn →
This entry was posted in anthropocene and tagged Africa, Americas, ecocide, endangered species, gondwana, megafauna, organised crime, origins of life, prehistoric, South Africa, South America, wildlife. Bookmark the permalink.