The MAPS of the 750 AD period to 1492 reveal how the 800 years of Muslim rule as a Caliphate was eventually overthrown by use of mercenaries (Conquistadors) of the Monarchy in 1492.  These are fascinating maps, interactive and highly illuminating to someone new to this unfolding significant part of history.  The power of a succession of Popes to influence the outcome of marriages between the various self created monarchy lines was vital. I recommend further reading on the subject of illegitimate, interbred aristocracy imposed on the peoples of a disunited landmass which eventually became known as a united Spain. The religious Catholic zeal grew out of the French Inquisition of the 12th century. Gradually it became a uniting belief to spread the faith and seek wealth through exploration of, as yet, unknown territory.

Coming to power in 1369, the House of Trastámara was a lineage of rulers of the Castilian and Aragonese thrones. The line of Trastámaran royalty in Castile ruled throughout a time period of military struggle with Aragon. Their family was sustained with large amounts of inbreeding, which led to a series of disputed struggles over rightful claims to the Castilian throne. This lineage ultimately ruled in Castile from the rise to power of Henry II in 1369 through the unification of the crowns under Ferdinand and Isabella. 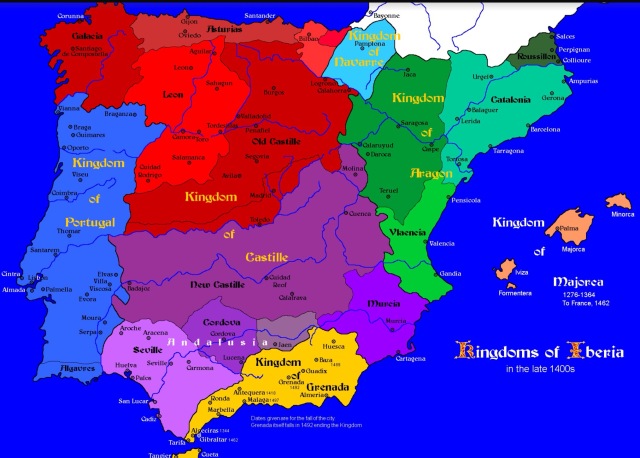 Ferdinand was King of Sicily and heir to the Aragonese throne. He was the brother of Henry III and after his demise and that of Henry’s son, John II, who left a two year old son, Ferdinand, served as regent to the throne, along with John’s mother, Catalina of Lancaster. During his time as regent, Ferdinand was chosen as the ruler of Aragon, due to his maternal relation to the Aragonese throne, through the Compromise of Caspe in 1412. The Trastámaras now ruled in both the realms of Castile and Aragon.

Ferdinand was betrothed to Isabella when they were 6 years old.  It was a difficult process for them to finally achieve this marriage from which major changes in the world flowed.

Retired, living in the Scottish Borders after living most of my life in cities in England. I can now indulge my interest in all aspects of living close to nature in a wild landscape. I live on what was once the Iapetus Ocean which took millions of years to travel from the Southern Hemisphere to here in the Northern Hemisphere. That set me thinking and questioning and seeking answers. In 1998 I co-wrote Millennium Countdown (US)/ A Business Guide to the Year 2000 (UK) see https://www.abebooks.co.uk/products/isbn/9780749427917
View all posts by borderslynn →
This entry was posted in anthropocene and tagged aragon, aristocracy, castile, catholicism, conflict, family, Ferdinand, isabella 1, mental health, mercenaries, nobles, portugal, power, spain, war. Bookmark the permalink.