Isabella of Portugal was married to King John II of Castile as his second wife, making her also Queen of Castille. Her stepson became Henry IV of Castille.

Isabella was 19 when she married John, who was 42. After a difficult birth of her daughter, born 1451, she developed a serious case of post natal depression and became mentally unstable. This led to her paranoia about the unwanted influence of a friend of her husband’s. She then conspired to incriminate him in a killing and he was executed for the crime. She believed she was haunted by the ghost of the dead man.

She had a son, Alfonso in 1454, a few months after her husband John II died. Isabella’s stepson, Henry IV, only 3 years her elder, became king of Castille, and he banished his stepmother to the Castle of Arévalo. Here, Isabella and her small children struggled to live in austerity, which further damaged her mental state.

Isabella ensured her daughter and namesake observed practical piety and a deep reverence for religion. But she became more paranoid and ill, the children were removed from her around 1461, and young Isabella, who was to become the wife of Ferdinand, did not see her mother again until she was dying in 1496.

When Henry IV’s wife, Joan of Portugal, was about to give birth to their daughter Joanna, Isabella and Alfonso were summoned to court (Segovia) to come under the direct supervision of the King and to finish their education. Alfonso was placed in the care of a tutor while Isabella became part of the Queen’s household. This meant a considerable improvement in living conditions for the children. Henry forbade Isabella from leaving Segovia or involving herself in local feuding. But she was well aware of what was going on around her.

Those making trouble for Henry were noblemen, anxious for power and demanding that Alfonso be named his successor. The nobles had gained control of Alfonso, and fought to make him heir at the Second Battle of Olmedo in 1467. The battle was a draw. Henry agreed to recognise Alfonso as heir presumptive, provided that he would marry his daughter, Joanna. Soon after he was named Prince of Asturias;  Alfonso died in July 1468, perhaps of the plague.

One other version of what befell Alfonso was that he died in suspicious circumstances and perhaps Isabella suspected that he had been murdered. Isabella had no reason to trust her half brother, Henry. Although he knew she had made her debut in the matrimonial market at the tender age of six, with a betrothal to Ferdinand. Ferdinand was the favourite and the younger son of John II of Aragon (whose family was a cadet branch of the House of Trastámara). Henry he was always trying to marry his half sister off to other financially suitable prospects to bolster his plans for his future heirs. But she had made her decision her co monarch would be Ferdinand and John II of Aragon secretly negotiated the wedding to his son Ferdinand. It seems she did not tell Henry when she was going to Valladolid to marry Infante Ferdinand of Aragon. Instead, she eloped, saying she was going to see her brother’s tomb in Ávila.

The marriage of Isabella and Ferdinand took place on 18 October 1469. 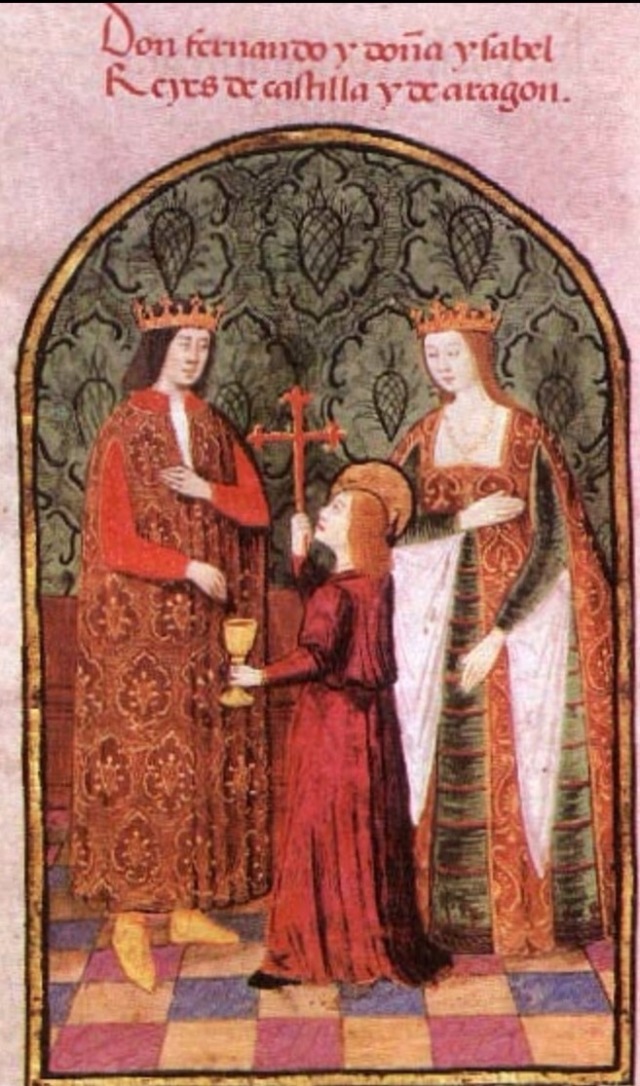 Since 1295, the remaining Muslim presence was in Southern Spain,  Grenada. Isabella was determined to expel them and it took until 1492 for her to do so.  This will be covered in my blog, Forceful Woman, Part II.

Retired, living in the Scottish Borders after living most of my life in cities in England. I can now indulge my interest in all aspects of living close to nature in a wild landscape. I live on what was once the Iapetus Ocean which took millions of years to travel from the Southern Hemisphere to here in the Northern Hemisphere. That set me thinking and questioning and seeking answers. In 1998 I co-wrote Millennium Countdown (US)/ A Business Guide to the Year 2000 (UK) see https://www.abebooks.co.uk/products/isbn/9780749427917
View all posts by borderslynn →
This entry was posted in anthropocene. Bookmark the permalink.