Movement of People of the African Sahara

I have been particularly interested in finding out why people migrated out of Africa, but there is also the story of those who remained.  The adaptable indigenous human, always so ingenious in the most hostile environments. Yet becoming part of the landscape and working with it, not against it.

Of interest: the word Sahara means desert in Arabic.

The world’s largest hot desert, the Sahara, is a subtropical desert in northern Africa.

The Sahara’s topographical features, (according to “The Living Africa,” by Steve Bloom, 2008) :

include not only the iconic sand dune fields, but also arid mountains, plateaus, sand- and gravel-covered plains, shallow basins and large oasis depressions. Its highest point is Chad’s Mount Koussi (an extinct volcanic crater that rises 11,204 feet above sea level at the peak), and its lowest, Egypt’s Qattera Depression (an oasis depression that lies 436 feet below sea level at the deepest point)

In 2007, Iain Stewart and joint author John Lynch wrote in their book Earth: the power of the planet, 2007, about a series of events which created the Sahara desertification:

“A small change in the distribution of incoming solar radiation, due to a subtle change in the Earth’s orbit, had weakened the equatorial storms that fed the African monsoons. Within a few decades, the tropical summer rains that once watered much of Northern Africa had retreated south, and vast areas of woodland and marsh had become parched wastelands. Over the following centuries, the drifting sands of the desert spread north as well, and the ancient peoples who had farmed the once fertile Sahara heartland were pushed out. Part of the exodus moved east to settle a river valley that had previously been too marshy, and so began the Nile civilisation and the age of the pharaohs. Others remained in isolated havens where water was still available, but by 2000 years ago only one group of hardy people was left holding back the desert: the Garmanthians, skilled charioteers who held in check the southward advances of imperial Rome. But on their flank, the advance ofthe desert was unstoppable. By AD 500, the Garmanthian culture was gone, its people scattered to a nomadic existence and its ruins buried beneath the sand.”

Current research using “a series of climate simulations, co-led by Dr Camille Contoux of the Bjerknes Center for Climate Research in Bergen, Norway, suggests that the desertification of Sahara started about 7 million years ago, at least four million years earlier than previously thought………this is due “to a recent discovery of 7-million-year-old sand dune deposits in the northern Chad Basin.”

The researchers describe the Sahara desert as:

“At over 9,400,000 km2, it covers nearly 10 percent of the African continent, including Algeria, Chad, Egypt, Libya, Mali, Mauritania, Morocco, Niger, Sudan and Tunisia.”

Robert Korty, associate professor in the Department of Atmospheric Sciences, along with colleague William Boos of Yale University, have had their work published in the current issue of Nature Geoscience in 2016. They are working on the effect of the Hadley circulation rainfall pattern. (The Hadley cell, named after George Hadley, is a global scale tropical atmospheric circulation that features air rising near the equator, flowing poleward at 10–15 kilometers above the surface, descending in the subtropics, and then returning equatorward near the surface.)

Korty tells us “As little as 6,000 years ago, the vast Sahara Desert was covered in grassland that received plenty of rainfall, but shifts in the world’s weather patterns abruptly transformed the vegetated region into some of the driest land on Earth.” He and his team are using computer models and other data, and have found links to rainfall patterns thousands of years ago.

The mystery was why did the tropical rainfalls move so far north?

“The Hadley circulation is a tropical atmospheric circulation that rises near the equator. It is linked to the subtropical trade winds, tropical rainbelts, and affects the position of severe storms, hurricanes, and the jet stream. Where it descends in the subtropics, it can create desert-like conditions. The majority of Earth’s arid regions are located in areas beneath the descending parts of the Hadley circulation.

“We know that 6,000 years ago, what is now the Sahara Desert was a rainy place,” Korty adds.

Korty says. “We were able to conclude that the variations in Earth’s orbit that shifted rainfall north in Africa 6,000 years ago were by themselves insufficient to sustain the amount of rain that geologic evidence shows fell over what is now the Sahara Desert. Feedbacks between the shifts in rain and the vegetation that could exist with it are needed to get heavy rains into the Sahara.”

Simulating paleoclimates in the Sahara region, a team of researchers from Germany and United Kingdom has found evidence of three major river systems that likely existed in North Africa about 130,000 – 100,000 years ago, but are now largely buried by dune systems in the desert. 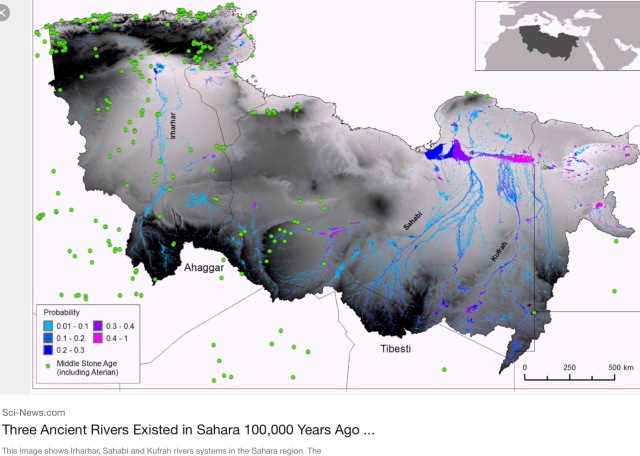 “It’s exciting to think that 100,000 years ago there were three huge rivers forcing their way across a 1,000 km of the Sahara desert to the Mediterranean and that our ancestors could have walked alongside them,” said Dr Tom Coulthard of the University of Hull, UK, who is a lead author of the study published in the journal PLoS ONE.A

Previous studies have shown that people traveled across the Saharan mountains toward more fertile Mediterranean regions, but when, where and how they did so is a subject of debate.

The existence of ‘green corridors’ that provided water and food resources were likely critical to these events, but their location and the amount of water they carried is not known.”

It is worth reading the explanation of how aquifers beneath the Sahara hold water which has lain there since the precipitation of the last glacial age. See http://www.oxfordpresents.com/ms/nance/water-in-the-sahara-desert/

Adjacent is the Arabian desert, located in Western Asia. It is a vast desert wilderness stretching from Yemen to the Persian Gulf and Oman to Jordan and Iraq. It occupies most of the Arabian Peninsula, with an area of 2,330,000 square kilometers (900,000 sq mi). It is the fourth largest desert in the world, and the largest in Asia. At its center is the Rub’al-Khali, one of the largest continuous bodies of sand in the world.

The Arabian Desert consists of two major regions. The first, the ancient Arabian platform (a segment of the African Shield), is in the west. It is composed mainly of Precambrian gneiss (dated to between 2.6 billion and roughly 541 million years ago) and was assembled roughly 900 to 541 million years ago.(Brittanica)

But back to the Sahara – a massive subject, only touched on here in my short blogs.

A little more useful detail at https://www.desertusa.com/du_sahara.html an extract here:

Its permanent rivers are the Nile and the Niger. The Nile rises in central Africa, south of the Sahara, and flows northward through Sudan and Egypt and empties into the Mediterranean. The Niger rises in western Africa, southwest of the Sahara, and flows northeastward into Mali and the desert then turns southeastward, through Nigeria, and empties into the Gulf of Guinea.

If you find yourself stuck in the desert, here are a few tips from http://www.pbs.org/lawrenceofarabia/revolt/water.htm

The ability to transport and find water is perhaps the most crucial element for survival in the desert. In extreme temperatures the human body can require over a gallon of water a day.

Bedouins are nomadic people. They move on to fresh pastures when their grazing lands are exhausted. They cannot afford to to sit tight where water is not plentiful.

Constantly on the move in a harsh environment they carefully planned their routes across desert landscapes, calculating precisely how far their water supply will stretch between wells.

The goat-skin bag has long been the traditional method for carrying water and, once drawn from deep wells, experience dictates how severely water must be rationed.

Tricks to finding water in the desert:

An old Bedouin trick is to turn over half-buried stones in the desert just before sun up. Their coolness causes dew to form on their surface.

Desert grass will also form dew in the pre-dawn with your tongue. It can be soaked up with a cloth and wrung out into a container.

Where sand dunes meet the sea digging above the high tide mark might reveal a thin layer of fresh water sitting atop a heavier layer of salt water.

Flies and mosquitos are a giveaway for a water source and bees fly in a straight line to and from water up to 1000 metres away.

Water seepage in canyons, small pockets of water in sandstone rock formations and digging at the base of rocks and mountains can produce water

Even contaminated water has its uses. It can be used to soak your clothing and reduce water loss from perspiration.close

The Taureg of Mauritania, NW Africa, an example of a people who still cling to their nomadic existence 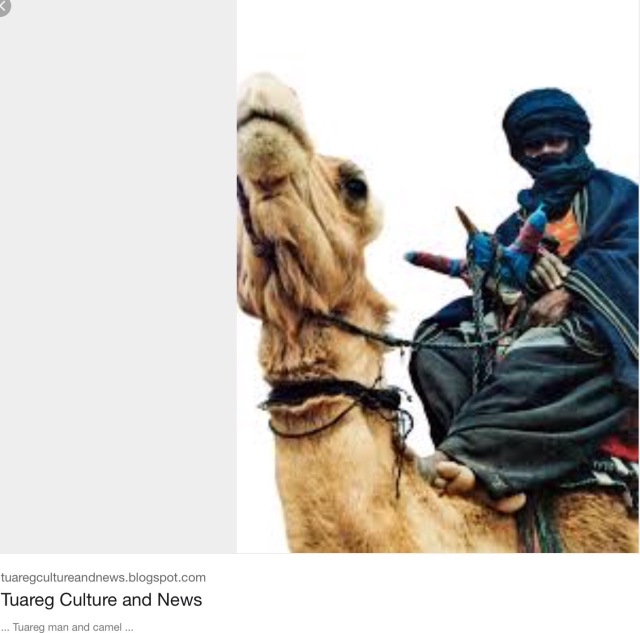 The Tuareg today inhabit a vast area in the Sahara, stretching from far southwestern Libya to southern Algeria, Niger, Mali and Burkina Faso. Their combined population in these territories exceeds 2.5 million, with an estimated population in Niger of around 2 million (11% of inhabitants) and in Mali of another 0.5 million (3% of inhabitants. The Tuareg are also the majority ethnic group in the Kidal Region of northeastern Mali.

In antiquity, the Tuareg moved southward from the Tafilalt region into the Sahel under the Tuareg founding queen Tin Hinan, who is believed to have lived between the 4th and 5th century. The matriarch’s 1,500 year old monumental Tin Hinan tomb is located in the Sahara at Abalessa in the Hoggar Mountains of southern Algeria. Vestiges of an inscription in Tifinagh, the Tuareg’s traditional Libyco-Berber writing script, have been found on one of the ancient sepulchre’s walls.

Some studies have linked the Tuareg to early ancient Egyptian civilization.

Archaeological excavations of prehistoric tombs in the Maghreb have yielded skeletal remains that were painted with ochre. Although this ritual practice was known to the Iberomaurusians, the custom seems instead to have been primarily derived from the ensuing Capsian culture. Megalithic tombs, such as the jedar sepulchres, were also erected for religious and funerary purposes. In 1926, one such tomb was discovered south of Casablanca. The monument was engraved with funerary inscriptions in the ancient Libyco-Berber writing script known as Tifinagh, which the Tuareg still use.

You might like to watch this this fascinating documentary to find out more about Taureg life: https://youtu.be/CUHEc1fQhwo

Retired, living in the Scottish Borders after living most of my life in cities in England. I can now indulge my interest in all aspects of living close to nature in a wild landscape. I live on what was once the Iapetus Ocean which took millions of years to travel from the Southern Hemisphere to here in the Northern Hemisphere. That set me thinking and questioning and seeking answers.
View all posts by borderslynn →
This entry was posted in Uncategorized and tagged Africa, aquifer, arabian, desert, ice age, megalithic, migration, nomads, paleolithic, rainfall, rivers, sahara, survival, water, weather patterns. Bookmark the permalink.