Destruction of the Garden

Humans thrive when nature provides them with fertile land where they feel safe and can develop skills. This was such a place, between less abundant and often hostile lands, it was a place humans would target and fight to keep and, in the end, as populations became more demanding, destroy by overuse. This was the Fertile Crescent.

The Fertile Crescent is traditionally associated (in Jewish, Christian and Muslim faiths) with the earthly location of the Garden of Eden. 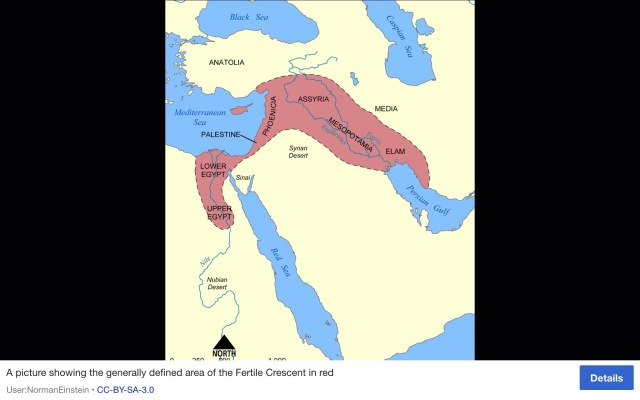 In 1916, the name was coined by Egyptologist James Henry Breasted in his work Ancient Times: A History of the Early World, where he wrote, “This fertile crescent is approximately a semi-circle, with the open side toward the south, having the west end at the south-east corner of the Mediterranean, the centre directly north of Arabia, and the east end at the north end of the Persian Gulf.”

When populations were small and took up little space in the Fertile Crescent, in around 10000 BC (12,000 years ago), farming practices began to develop and humans began to settle rather than be nomads.

Humans had always gathered seeds and berries as hunter-gatherers. Now they sowed the seeds and reaped the crop. For human history this was the Neolithic revolution. Until that time, humans had no sense of property, no concept of protecting an area of land they believed to belong to them alone, no thought of the costly defence of such territory and all the artefacts they were to create and identify as their own.

They just wanted to be comfortable and have plentiful food and water ‘on hand’, so to speak.

Over thousands of years, these early farmers domesticated the first crops and transformed sheep, wild boars and other creatures into domestic animals.

Recently (2016) population geneticists at Harvard Medical School in Boston, Massachusetts, Losif Lazaridis and David Reich, managed to take a genetic sample from a tiny ear bone called the petrous, to analyse the genomes of the 44 Middle Eastern individuals, who lived between 14,000 and 3,500 years ago. As it has been so far hugely difficult to analyse DNA in hotter climes, this has proven to be a breakthrough.

Their findings, and more recent studies, suggest the ‘toolkit’ for farming came from two Middle Eastern populations who independently developed farming and then spread the technology to Europe, Africa and Asia.

The team found stark differences between the genomes of Neolithic individuals from the southern Levant region, including Israel and Jordan, and those living across the Zagros Mountains in western Iran. The Zagros early farmers were instead more closely related to nearby hunter-gatherers who lived in the region before the Neolithic.

This pattern of ancestry adds to the evidence that the hunter-gatherers in the southern Levant and Iran independently developed farming, says Roger Matthews, an archaeologist at the University of Reading, UK, who co-directs the Central Zagros Archaeological Project in Iran.

The Zagros farmers domesticated goats as well as cereals such as emmer, whereas their counterparts to the west had their own crops, including barley and wheat. Around 9,500 years ago, these traditions began spreading around the Middle East, Rogers says, noting that the two populations of farmers may have mixed in eastern Turkey while seeking out sources of obsidian, which was useful for making tools. By the time farmers in present-day Turkey began migrating to Europe, they carried a ‘Neolithic toolkit’ that included crops, animals and tools from both farming traditions.

But the present day state of the Fertile Crescent speaks of the tragedy of Anthropocene impact.

Around 90 per cent of the Mesopotamian marshlands have been lost, mainly as a result of drainage and damming.

A study by scientists in 2001 at the United Nations Environment Programme (UNEP), drawing on historical and satellite images, has collected the first hard evidence detailing the true extent of damage to this important habitat for people, (Marsh Arabs) wildlife and fisheries.

The immediate cause of loss of marshland is, however, the massive drainage works implemented in southern Iraq in the early 1990s following the second Gulf War.

The satellite images provide hard evidence that the once extensive marshlands have dried-up and become desert with vast stretches salt encrusted. A small northern fringe of the Hawizeh (known as the Hawr Al-Azim in Iran), is all that remains. The Hawizeh Marshes are a complex of marshes that straddle the Iraq and Iran border. The marshes are fed by two branches of the Tigris River (the Al-Musharrah and Al-Kahla) in Iraq and Karkheh River in Iran. The Hawizeh marsh is critical to the survival of the Central and Hammar marshes, which also make up the Mesopotamian Marshes, because they are a refuge for species that may recolonize or reproduce in the other marshlands. The Hawizeh Marshes are drained by the Al-Kassarah. This river plays a critical role in maintaining the marshes as a flow-through system and preventing it from becoming a closed saline basin.

Even this last vestige is rapidly disappearing as its water supply is impounded by new dams and diverted for irrigation. The collapse of Marsh Arab society, a distinct indigenous people that has inhabited the marshlands for millennia, adds a human dimension to this environmental disaster.

Around one fifth of the estimated half-million Marsh Arabs are now living in refugee camps in Iran with the rest internally displaced within Iraq. A 5,000 year-old culture, heir to the ancient Sumerians and Babylonians, is seriously in jeopardy of coming to an abrupt end.

The impact of marshland loss on the area’s teeming wildlife is probably equally devastating with significant implications for global biodiversity, including migratory birds, from Siberia to southern Africa. The marshlands disappearance has placed an estimated forty species of waterfowl at risk. Mammals, such as the smooth coated otter, that exist only in the marshlands are now considered extinct. Coastal fisheries in the northern Gulf, which depend on the marshlands for spawning grounds, have also experienced a sharp decline.

The Marsh Arabs are believed to be the cultural descendants of the ancient Sumerian and later Babylonian civilizations.

Sumer was the southernmost region of ancient Mesopotamia (modern-day Iraq and Kuwait) which is generally considered the cradle of civilization. The name comes from Akkadian, the language of the north of Mesopotamia, and means “land of the civilized kings”. The Sumerians called themselves “the black headed people” and their land, in cuneiform script, was simply “the land” or “the land of the black headed people”. In the biblical Book of Genesis Sumer is known as Shinar. One of the many ‘taken for granted’ gift to us from them is the 24 hour clock. Their empire was built from the Middle to Late Bronze Age. The city-states of Sumer during this time fought for control of arable land and water rights until the rise of the First Dynasty of Lagash in 2500 BCE.

The same communal mudhif buildings seen in marsh culture today have also been seen depicted on Sumerian seals from 5000 years ago. There are also apparent similarities between the agricultural and irrigation practices of the ancient Sumerians and the modern day ‘Ma’dan’, as the present Marsh Arabs are known. The Sumerians also travelled in similar slender reed boats, caught fish and birds with long spears, lived on marsh islands in reed houses, and herded water buffalo, sheep and cattle.

Yet another indigenous group forced from their ancient way. Watch more recent film of the Marsh Arabs at https://youtu.be/Awsjn-_rvxI

Retired, living in the Scottish Borders after living most of my life in cities in England. I can now indulge my interest in all aspects of living close to nature in a wild landscape. I live on what was once the Iapetus Ocean which took millions of years to travel from the Southern Hemisphere to here in the Northern Hemisphere. That set me thinking and questioning and seeking answers.
View all posts by borderslynn →
This entry was posted in Uncategorized and tagged arable land, bronze age, dam technology, ecology, Farming, fertile crescent, habitat, irrigation, pre neolithic, water, wildlife. Bookmark the permalink.

1 Response to Destruction of the Garden