Before humans there were many forms of life

I found the following useful https://dinosaurpedia.wordpress.com

I have referred back to Scotland (where I live) as this country has some ancient geology well worth a visit by anyone who wants to walk on rocks older than many places found elsewhere.

The first living things on Earth were very simple, single-celled forms of life. There were bacteria and a type of algae called blue-greens. Fossils of blue-greens and bacteria have been found in rocks 3,000 million years old. The hot springs in Yellowstone Park, North America contain bacteria and simple algae. Perhaps this scene is similar to 3,000 million years ago when life began.

Here in Scotland the oldest rocks are the Lewisian gneisses, which were formed in the Precambrian period, up to 3,000 Ma (million years ago). They are among the oldest rocks in both Europe and the World. They form the basement to the west of the Moine Thrust on the mainland, in the Outer Hebrides and on the islands of Coll and Tiree. These rocks are largely igneous in origin, mixed with metamorphosed marble, quartzite and mica schist and intruded by later basaltic dykes and granite magma. One of these intrusions forms the summit plateau of the mountain Roineabhal in Harris. The granite here is anorthosite, and is similar in composition to rocks found in the mountains of the Moon.
Image of anorthosite: 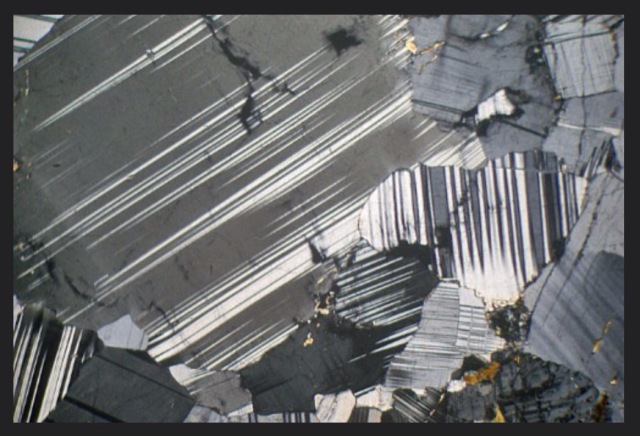 Torridonian sandstones were also laid down in this period over the gneisses, and these contain the oldest signs of life in Scotland. In later Precambrian times, thick sediments of sandstones, limestones muds and lavas were deposited in what is now the Highlands of Scotland.

Example of rocks NW Highlands of Scotland courtesy of http://1.bp.blogspot.com/-6rbOcjzrszo/TjGDFrObbSI/AAAAAAAAApo/v5KcIN4rJLs/s1600/Book_1.png 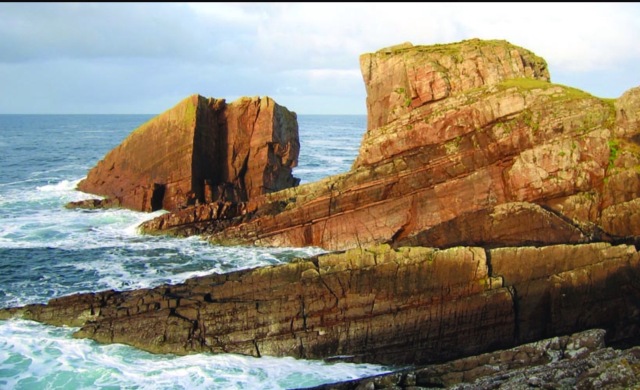 From the start of the Cambrian period 543m years ago, the number of animal species grew dramatically. The fossil record goes from showing no animal fossils to suddenly showing tracks and body fossils all over the globe. All major animal groups, including the ancestors of vertebrates, showed up over just a few tens of millions of years (a short period in geological time).

Before fish, the seas were home to other creatures. Many of them were like sea animals that live today. There were jellyfish, shellfish called brachiopods and many sorts of sea worms. One type of animal that hasn’t survived is the trilobite. Trilobites were sea creatures with hard bodies like armour, which were jointed so that they could move. They had legs like those of shrimps. To protect themselves some would curl up into a ball, rather like a woodlouse.

The first plants were leafless and flowerless and no more than 4 or 5 cm tall. They lived in boggy ground. Through this miniature jungle, scorpions hunted milipedes that fed on the plants.

The first animals with backbones were fish. It is thought that sometime during this period Eusthenopteron, a fish that used its front fins to help it ‘walk’, crawled out of the water to live on land. It was the ancestor of land animals.

Amphibians live on land and in water, where they lay their eggs. Amphibians evolved from fish. At this time in history amphibians were very successful. Some amphibians were quite big. Icthyostega was about 1 m long. It looked a bit like a fish and had scales and a fin, but it had legs and could walk on land, although it spent most of its time in water.

“[This] study has important global implications, because we know early plants cooled the climate and increased the oxygen level in the Earth’s atmosphere,” conditions that supported the expansion of terrestrial animal life, says Tim Lenton, an earth system scientist at the University of Exeter, United Kingdom who was not involved with the work.

These locations of dinosaur remains have been listed at http://ark-survival-evolved.wikia.com/wiki/Category:Dinosaurs_by_Location 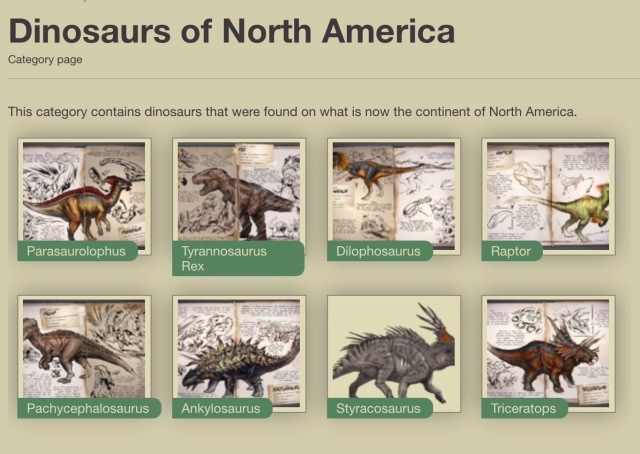 Dinosaurs began life during an era we call The Jurassic. They lived successfully for 160 million years up to the fatal asteroid strike 65 million years ago.

Unlike us, they adapted particularly well to life on this planet. We are still trying to adapt, but I don’t think we have millions of years to look forward to for much needed evolved attributes.

Reasons for their success:

They had evolved scaly, waterproof skin. The overlapping scales kept the dinosaur dry and protected it.

They laid hard-shelled eggs which helped many young to survive.

Dinosaurs could walk on land more easily than many of the other animals of the time, so they could find food and escape from enemies quickly.

Some dinosaurs ate plants and some ate meat. This meant that there was usually enough food to go round.

We humans, on the other hand, began evolving a mere 3 million years ago, and I think we would agree, we don’t have the staying power of dinosaurs! We have already plundered our generous planet and are looking for other planets to move to.

Here in Scotland, as the Jurassic (201–145 Ma) started, the earth continents were on the move. Pangaea began to break up into two continents, Gondwana and Laurasia, marking the beginning of the separation of Scotland and North America. Sea levels rose, as Britain and Ireland drifted on the Eurasian Plate to between 30° and 40° north. Most of northern and eastern Scotland including Orkney, Shetland and the Outer Hebrides remained above the advancing seas, but the south and south-west were inundated. 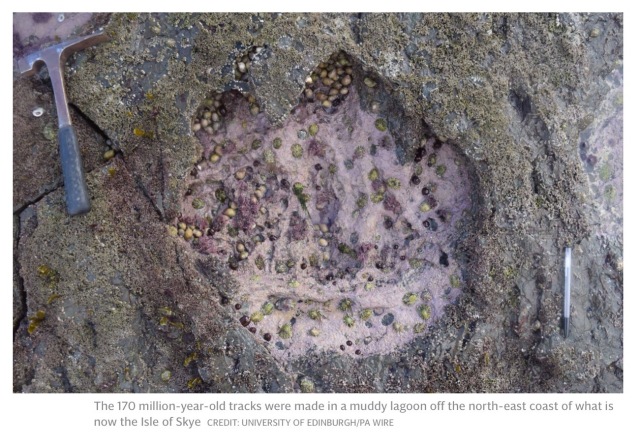 “Their long-necked prints are almost car tyre size whereas the meat-eater ones are about the size of a basket ball.”
Dr Brusatte added: “The more we look on the Isle of Skye, the more dinosaur footprints we find.

When the fatal asteroid struck, what actually happened?

Researchers recovered rocks from under the Gulf of Mexico that were hit by the asteroid. The nature of this material records the details of the event. It is becoming clear that the 15km-wide asteroid could not have hit a worse place on Earth.

In 2008 a geologist, Mark Harvey conducted research while he was a master’s student at IU Bloomington. Claire Belcher (University of London) and Alessandro Montanari (Coldigioco Geological Observatory) also contributed to the study. It was funded by the Geological Society of America, the Indiana University Department of Geological Sciences, and the Society for Organic Petrology.

The tiny airborne beads blanketed the planet, assuming a global distribution, to be perhaps as much as 900 quadrillion kilograms.

That was why it was the worst place for the asteroid to hit.

The reptilian dinosaurs died out due to their reliance as land living creatures, unable to find shelter or safety of any kind.

An article in the Daily Mail gave an impression of what the disaster may have been like:

“Within 10 hours of the impact, a massive tsunami wave ripped through the Gulf coast.

This caused earthquakes and landslides in areas as far as Argentina.

The creatures living at the time were not just suffering from the waves – the heat was much worse.

While investigating ‘dooms day’ researchers found small particles of rock and other debris that was shot into the air when the asteroid crashed.

Called spherules, these small particles covered the world with a one-tenth inch thick layer of soot.

Experts explain that losing the light from the sun caused a complete collapse in the aquatic system as the phytoplankton base of almost all aquatic food chains would have been eliminated.

It’s believed that the more than 180 million years of evolution that brought the world to the Cretaceous point was destroyed in less than the lifetime of a Tyrannosaurus rex, which is about 20 to 30 years.

Scientists are taking rock core samples from the impact zone in Mexico, known as the Chicxulub crater.

The site of the crash of Chicxulub has been on record since the 1980s and is home to the impact that is more than 100 miles (160km) in diameter, reports Smithsonian Magazine.

Scientists have also discovered signs of a massive tsunami around the Gulf coast.

They believe the asteroid hit Earth with such force that, within 10 hours, a huge wave made its way along the coast, causing mass destruction.

The wave would have caused sand to end up on dry land, while plants would have been thrown into the ocean.

Signs of this geological mix up can still be seen today in sedimentary layers of rock that mark the final day of the Cretaceous period.

The blast also triggered earthquakes and landslides in regions as far away as Argentina.

But perhaps the most devastating result of the impact was the intense heat that followed.

The asteroid caused tiny particles of rock to shoot into the air and settle into a thin layer across the world.

‘The kinetic energy carried by these spherules is colossal, about 20 million megatons total or about the energy of a one megaton hydrogen bomb at six kilometer intervals around the planet,’ University of Colorado geologist Doug Robertson told the Smithsonian.

That kinetic energy would have produced intense heat, beginning around 40 minutes after impact and lasting for several hours.”

According to Penn State researcher Russ Graham, the lifestyles of mammals gave them an advantage when the asteroid struck the area. In response to a “probing question” published on the university’s website, Graham opined that mammals that used burrows or lived in aquatic environments would have been shielded from the intense heat that briefly followed the impact. Once the heat was off, mammals could come back out and make the most of the remaining food resources. There may not have been enough food for dinosaurs, but the more generalized tastes of mammals allowed them to hang on.

Researchers recently announced they had found evidence that a string of volcanoes in a region of India known as the Deccan Traps doubled their activity around 50,000 years after the Chicxulub impact.

Retired, living in the Scottish Borders after living most of my life in cities in England. I can now indulge my interest in all aspects of living close to nature in a wild landscape. I live on what was once the Iapetus Ocean which took millions of years to travel from the Southern Hemisphere to here in the Northern Hemisphere. That set me thinking and questioning and seeking answers. In 1998 I co-wrote Millennium Countdown (US)/ A Business Guide to the Year 2000 (UK) see https://www.abebooks.co.uk/products/isbn/9780749427917
View all posts by borderslynn →
This entry was posted in anthropocene and tagged asia, asteroid, climate change, dinosaurs, Eurasia, extinction, Gulf of Mexico, North America, oil, origins of life on earth, scotland, South America, timeline. Bookmark the permalink.