The Great Rift Valley route out to world exploration

The Red Sea (also the Erythraean Sea) is a seawater inlet of the Indian Ocean, lying between Africa and Asia. The sea is underlain by the Red Sea Rift which is part of the Great Rift Valley, that stretches across East Africa, it is about 48 km (30 mi) long. It is located in the eastern Serengeti Plains in the Arusha Region not far, about 45 kilometres (28 miles), from Laetoli. The connection to the ocean is in the south through the Bab el Mandeb strait and the Gulf of Aden. To the north lie the Sinai Peninsula, the Gulf of Aqaba, and the Gulf of Suez (leading to the Suez Canal).

The Leakey family famously searched the Olduvai Gorge (within the Great Rift Valley in Tanzania) and found the fossilised remains of Homo habilis who was time dated to have occupied Olduvai from 1.9 mya. This led to further understanding the origins of the human race. From this area, over thousands of years, some of the early hominids moved away from their place of origin and travelled eastward and northward.

Topography of the Olduvai Gorge area 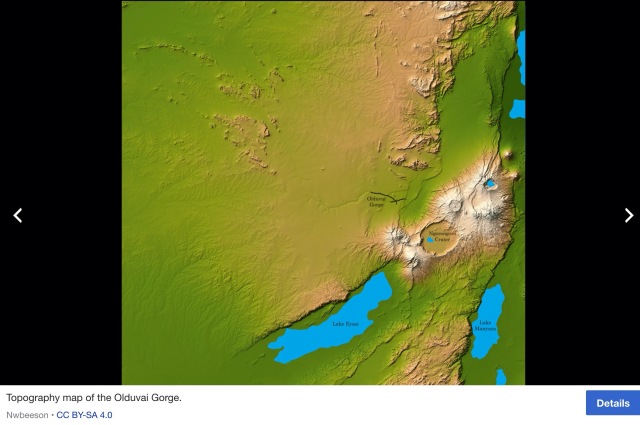 In Ethiopia, the remains of ‘Lucy’ (the common name of AL 288-1) in several hundred pieces of bone fossils representing 40 percent of the skeleton of a female of the hominin species Australopithecus afarensis. In Ethiopia, the assembly is also known as Dinkinesh, which means “you are marvelous” in the Amharic language. Lucy was discovered in 1974 in Africa, near the village Hadar in the Awash Valley of the Afar Triangle in Ethiopia, by paleoanthropologist Donald Johanson of the Cleveland Museum of Natural History.

Researchers are constantly tracing of the migrations within and Out of Africa.

Some early hominids moved to the Sudan and developed cultures, such as those who built around 200 pyramids. Meroe was the capital of the Kingdom of Kush, which was ruled by the Nubian kings. Up to 4,600 years old, the pyramids of Meroe were built in the what’s known as Nubian style, marked by steep slopes and small bases.
Image of pyramids

Yet other hominids moved across the dry bed of the Red Sea (the northern hemisphere ice age trapping all the water which would later flow and fill this important sea, with its wonderful and flourishing diversity being explored in the last decade – see http://www.natureasia.com/en/nmiddleeast/article/10.1038/nmiddleeast.2015.195)

The hominids became adventurers, moving through the Arabian Peninsula into Asia. The climate changed over tens of thousands of years and hominids evolved and adapted, their brains grew with knowledge and experience.

Those who settled in ancient Yemen noted the twice yearly monsoons and developed irrigation systems to exploit these rains as they fell on the mountainous south west. This is where the frankincense tree was cultivated and large oases across this area were cultivated for millennia by the ancient people. There the date palms grew. Camels were first hunted as food, but later domesticated. Urban societies grew into cities until the Peninsula lay between two great powers by the 4th millennium B.C. Egypt to the west and Mesopatamia to the north east.

Some hominids had travelled to the Mediterranean. In 1993 bones of a young girl were discovered in a cave. In 2018, it was reported that an orthodontist has been able to reconstruct the young girl given the moniker of Avgi (‘Dawn’), who lived during circa 7000 BC – thus being among the first inhabitants of what is now considered mainland Greece. Corresponding to the end of the Mesolithic Period, Avgi probably resided at the Cave of Theopetra in Thessaly, Central Greece. Theopetra Cave, in the Thessaly region, was first inhabited about 100,000 years ago, according to the Culture Ministry. Stone tools from the Palaeolithic, Mesolithic and Neolithic periods have been discovered, as well as pottery from the Neolithic period.

Avgi, or Dawn, is believed to be aged between 15 to 18 based on an analysis of her bones and teeth. She has a protruding jaw, thought to be caused by chewing on animal skin to make it into soft leather – a common practice among people of that era – and a scowling expression.

Asked why she looked angry, orthodontics professor Manolis Papagrikorakis, who created a silicone reconstruction of her face from a terracotta mould of her head, joked: “It’s not possible for her not to be angry during such an era.”

Dawn was possibly anemic and may have suffered from scurvy, the researchers said. Evidence also pointed to hip and joint problems, which may have made it difficult for her to move and may have contributed to her death.

Such evidence gives us an idea of the struggle to survive to adulthood in those days of nomadic hunter gatherers.

Just before 6000 B.C. populations living in the East Mediterranean grew into Mycenaean Minoan cultures which in turn became the forcing ground for the great civilisations of Greece and Rome.

The remains of the once great Greek empire are extensive. Here a place in Sicily dating back to the 5th century BC:

The Valle dei Templi (Italian pronunciation: [ˈvalle dei ˈtɛmpli]; English: Valley of the Temples; Sicilian: Vaddi di li Tempri) is an archaeological site in Agrigento (ancient Greek Akragas), Sicily, southern Italy. It is one of the most outstanding examples of Greater Greece art and architecture, and is one of the main attractions of Sicily as well as a national monument of Italy. The area was included in the UNESCO World Heritage Site list in 1997. Much of the excavation and restoration of the temples was due to the efforts of archaeologist Domenico Antonio Lo Faso Pietrasanta (1783–1863), who was the Duke of Serradifalco from 1809 through 1812. The archaeological park and landscape of the Valley of the Temples is the largest archaeological site in the world with 1,300 hectares.

This was one of the major Greek-populated settlements of Magna Graecia, during what is termed as the golden age of Greek city-states (circa 5th century BC). The city, famous for its monumental Valle dei Templi (Valley of the Temples), was originally founded in the early 6th century by Greek colonists from Gela (in Sicily), and by the turn of the century, it possibly had a population of more than 100,000 people. And now, archaeologists have found evidence of one of the settlement’s eminent civic structures, in the form of a large Hellenistic theater possibly dated from circa 4th century B.C.

In the research, the team thoroughly surveyed the Valley of the Temples, and located the remains of as many as 10 Doric shrines, each dedicated to a Greek god, goddess or hero, such as Juno, Heracles, Demeter and Persephone, Olympic Zeus, Vulcan, Concordia, Aesculapius and so on.

But those hominids who had travelled to colder climes were unable to settle comfortably and had to be content with less sophistication. The Greek historian Ephorus, in the fourth century B.C, claimed there were four great barbarian peoples in the known world: the Libyans in Africa, the Persians in the east, and in Europe the Scythians and the Celts.

When people think of themselves as sophisticated because they have explored knowledge through understanding ancient to the most modern writings, it is a human failing that we may then categorise humans without empathy. We may interpret, inaccurately, and describe the human family as hierarchical pyramids with elite at the pinnacle and lesser beings below. Even worse, we may specify imagined racial differences and provide a sense of ‘other’ as a threat to the rest, which must be eradicated for the sake of ‘the rest’ (who are not clearly specified).

That we are one human family is obvious and it is sad that we have built much of our written history on notions of difference which has led us inflict harm on innocents in the name of some belief which has no solid foundation.

The real differences between us are for us to marvel at, accept and appreciate.

Retired, living in the Scottish Borders after living most of my life in cities in England. I can now indulge my interest in all aspects of living close to nature in a wild landscape. I live on what was once the Iapetus Ocean which took millions of years to travel from the Southern Hemisphere to here in the Northern Hemisphere. That set me thinking and questioning and seeking answers. In 1998 I co-wrote Millennium Countdown (US)/ A Business Guide to the Year 2000 (UK) see https://www.abebooks.co.uk/products/isbn/9780749427917
View all posts by borderslynn →
This entry was posted in anthropocene and tagged Africa, arabia, ethiopia, Europe, greece, hominids, middle east, near East, red sea, sicily, sudan, tanzania, yemen. Bookmark the permalink.