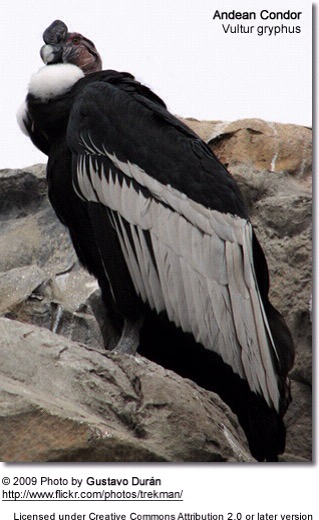 The magnificent Condor is a familiar and respected scavenger bird which flies over the Americas. Condors are part of the family Cathartidae which contains the New World vultures. The Andean Condor‭ (‬Vultur gryphus‭)‬,‭ ‬is thought to possibly be the most similar living bird to the Late Miocene Argentavis magnificens, but less than half its size.‭ ‬

According to the current consensus, birds, known as Aves and a sister group, the order Crocodilia, together are the sole living members of an unranked “reptile” clade, the Archosauria. Archosaurs Temporal range: Early Triassic–Present, 250–0 Ma . The earliest archosaurs were rauisuchians, such as Scythosuchus and Tsylmosuchus, both of which have been found in Russia and date back to the Olenekian in the Early Triassic.

Archosaurs quickly became the dominant land vertebrates in the early Triassic. Fossils from before the mass extinction have only been found around the Equator, but after the event fossils can be found all over the world.

Non-avian dinosaurs and pterosaurs perished in the Cretaceous–Paleogene extinction event, but birds (the only remaining dinosaur group) and crocodilians survived. Both are descendants of archosaurs, and are therefore archosaurs themselves under phylogenetic taxonomy.

California condors are the largest flying land birds in North America. The Andean condor is second only to the wandering albatross (up to 3.5 m) in terms of wingspan among all living flying birds. 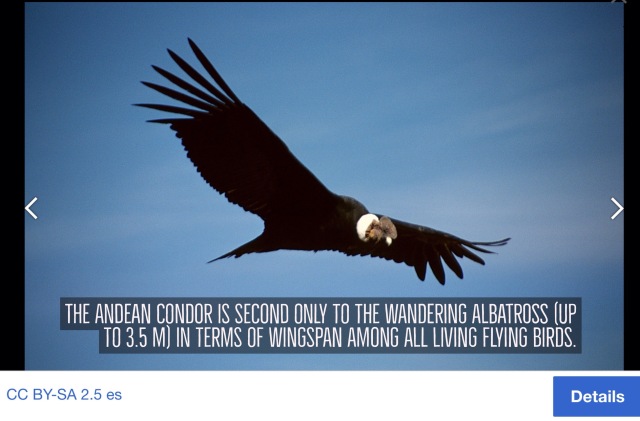 The researchers behind a 2016 study in The Condor: Ornithological Applications analyzed samples from condor museum (California) specimens dating back to the 1820s and found that the historical population was surprisingly diverse, but that a substantial amount of that diversity was lost in the last two centuries. This finding supports the hypothesis that condors were fairly widespread and abundant prior to increases in human-caused mortality, which likely drove their numbers down quickly in the 1800s and early 1900s.

Californian Condors nearly went extinct in the 1980s as a result of hunting, lead contamination, DDT poisoning, and other factors. The last 22 California condors were brought into captivity in 1987 in a last-ditch effort to breed them in safety and save the species from disappearing.

That desperate move was a success. Today, the California condor population has risen and the birds have returned to the skies above California, Arizona, Utah, and Baja, Mexico.

Today, some try to conserve the rapidly diminishing endangered species who have suffered so much from selfish human activities. But relentless industrialisation is reducing species at a frightening rate, and we humans will likewise perish quite soon if the global industrial system continues to recite its mantra of “growth” and obsession with share price investments.

It doesn’t take much imagination to envisage the abundance of condors flying during the Mesoamerican era. They represented god-like powers to those who recognised their special attributes. No-one was going to persecute them, they were too revered.

The Incas believed the Condor was climbing high to freedom. On its wings it carried the spirit of the dead to the upper world. To ‘become’ a condor, a person must first achieve the status of a condor, change, give up old ways, renew oneself, as the snake shed its skin to reveal a new skin. And in this way the person may achieve wisdom and stability as one observes in the puma, then the way home to the afterlife will be opened up. The snake, the condor, the puma represent spiritual levels toward the afterlife. The Incas believed that death is not an end but rather the beginning of a new cycle. The ancestors deemed that time is non-linear, but everything has its cycle that ends and begins again.

It was maybe just as well they held this comforting thought as so many Incas and other indigenous people were to die in a short period of time after the Spanish invaded their homelands.

But what flew before the Condor, before humans ever walked the Earth?

During the 1970s and 80s, researchers found fossils of such birds.

At first Argentavis magnificens seemed to be the largest ever found, but now the record is broken by PELAGORNIS SANDERSI.

Chart of A.magnificens compared to Condor 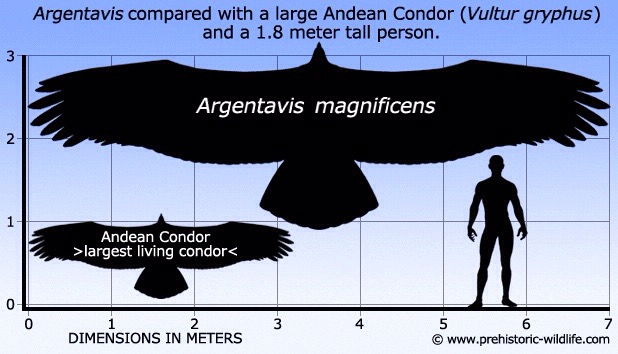 Let us first find out about the former, then learn about the latter.

A. magnificens, sometimes called the giant teratorn, has been identified due to a good number of extinct species fossils being found from three sites in the Epecuén and Andalhuala Formations in central and northwestern Argentina. They have been dated to the Late Miocene, Messinian,(also Huayquerian is used more specifically with South American Land Mammal Ages. It follows the Mayoan and precedes the Montehermosan age).

The Late Miocene Epoch covers 11.6 million to 5.3 million years ago. The Miocene may also be divided into six ages and their corresponding rock stages: from oldest to youngest these ages or stages are the Aquitanian, Burdigalian, Langhian, Serravallian, Tortonian, and Messinian. The Miocene followed the Oligocene Epoch of the Paleogene Period and was succeeded by the Pliocene Epoch.

Argentavis most probably used its large wings to exploit a combination of thermal up draughts‭ ‬as well as dynamic soaring.‭ ‬Dynamic soaring is essentially where a flying creature uses the boundary between two air masses to pick up speed by cartwheeling into oncoming wind and using the wind speed to accelerate itself forward.‭ ‬Repeating this process further increases the speed of the bird and resulting effect of the next manoeuvre resulting in an extremely energy efficient form of flight,‭ ‬one that is now even used by human glider pilots to stay airborne longer.

A. magnificens wingspan is estimated at 4 m (13 ft). A.magnificens could spot carrion and would behave much like that of a scavenger bird today, perhaps similar to the Condor. Scavenging would also require little in the way of active movement,‭ ‬reducing the required number of calories to keep its body going. 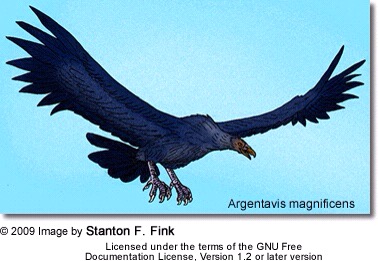 In 2014 there was enough data to declare to the world that the largest bird fossil to date had been found, named  PELAGORNIS SANDERSI . The fossil was unearthed in 1983 in Charleston, South Carolina. At the time the bird lived, 25 million years ago, this area was an ocean. The bird is named after Albert Sanders, the former curator of natural history at Charleston Museum, who led the excavation. It was so big they had to remove it using a JCB.

They flew during the Oligocene ( /ˈɒlɪɡoʊsiːn/) a geologic epoch of the Paleogene Period which extends from about 33.9 million to 23 million years before the present.

Working from a fossil skull, as well as wing and leg bones, researchers calculated the likely size of the bird and modelled possible flight styles – including flapping and gliding. From computer modelling it was estimated the bird weighed up to 180lbs (81.5kg), yet it managed to fly and soar on the thermals just like the Condor today. The skeletal wingspan (excluding feathers) of P. sandersi is estimated at 5.2 m (17 ft) while that of A. magnificens is estimated at 4 m (13 ft).

Its paper-thin hollow bones, stumpy legs and wing shape made it similar to birds that fly today, and this would have made it awkward when on land.

Its size and telltale beak suggested the creature was a previously unknown species of pelagornithid – an extinct group of giant seabirds believed to be ancestors of pelicans and storks.

They were known for bony ‘teeth’ that lined their jaws.

The more we seek knowledge about past life forms, the greater we respect the wonder within this special planet.

When wealthy elites seek to gain kudos from seeming to campaign to ‘save the planet’ whilst cynically increasing their wealth through dark means, we may foolishly follow them to human extinction. We must be careful to avoid their manipulation of our good intentions and natural caring and direct our energies where it really counts.

Retired, living in the Scottish Borders after living most of my life in cities in England. I can now indulge my interest in all aspects of living close to nature in a wild landscape. I live on what was once the Iapetus Ocean which took millions of years to travel from the Southern Hemisphere to here in the Northern Hemisphere. That set me thinking and questioning and seeking answers. In 1998 I co-wrote Millennium Countdown (US)/ A Business Guide to the Year 2000 (UK) see https://www.abebooks.co.uk/products/isbn/9780749427917
View all posts by borderslynn →
This entry was posted in anthropocene and tagged a.magificens, Americas, andes, aves, california, condor, endangered species, extinction, incas, miocene, p.sandersi, religion, triassic. Bookmark the permalink.

3 Responses to The Sacred Condor