The Significance of Aurochs

During the Pliocene, the colder climate caused an extension of open grassland, which led to the evolution of large grazers, such as wild bovines. Bos acutifrons is an extinct species of cattle that has been suggested as an ancestor for the aurochs. These magnificent beasts are the focus of this blog.

Prior to the aurochs, we now know Ardipithecus, an early hominin genus existed 4.4 million years ago. 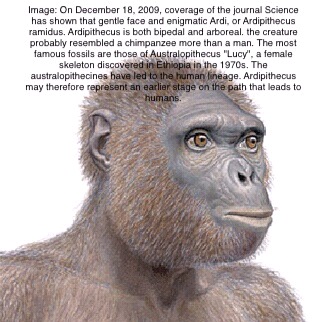 Then there was Australopithecus afarensis Lucy, discovered 75 km away from Aramis and who lived more than a million years later, still before the aurochs. Both these early hominin fossils were discovered in Ethiopia, East Africa.

One of the most fascinating pieces of evidence for hominin upright walking comes from the 3.5 million year old footprints preserved in volcanic ash at Laetoli, Tanzania. These footprints were left by a small group of Australopithecus, probably a mother, father and their tiny child.

These new hominids essentially resembled chimps, except for their upright walking. They were pioneers of a new way of living, striding out into a new kind of habitat, Africa’s predator rich savannah. It’s almost certain that one species of Australopithecus was our direct ancestor. For 3 million years, hominids were exclusive to Africa.

The earliest migrations and expansions of archaic and modern humans across continents began 2 million years ago with the migration out of Africa of Homo erectus, followed by other archaic humans including H. heidelbergensis, the likely ancestor of both anatomically modern humans and Neanderthals, around 500,000 years ago.

2 million years ago, the aurochs would have been traversing those parts of the global landscape where suitable climate and vegetation existed, at the same time as these nomadic early humans. They would cross into new territory over land bridges, later to be covered by rising sea levels.

Cave paintings testify to their existence thousands of years later in France – created by skilled, intelligent nomadic hunters, around 30,000 years ago.

But those who remained in Africa, or returned, travelled this vast continent, leaving only traces of their existence for archaeologists and others in the natural sciences, to discover thousands of years later.

“Humans have lived in Africa in one form or another for millions of years, much longer than anywhere else, meaning that many of the living megafauna such as African elephants, white rhinos and leopards actually evolved alongside us. Our long evolutionary association goes a long way to explaining why Africa is still home to giants, and also why the rest of the world is sadly biologically impoverished. ” See https://owlcation.com/stem/The-African-Megafauna

The oldest aurochs remains have been dated to about 2 million years ago, in India. The Indian subspecies was the first to appear. 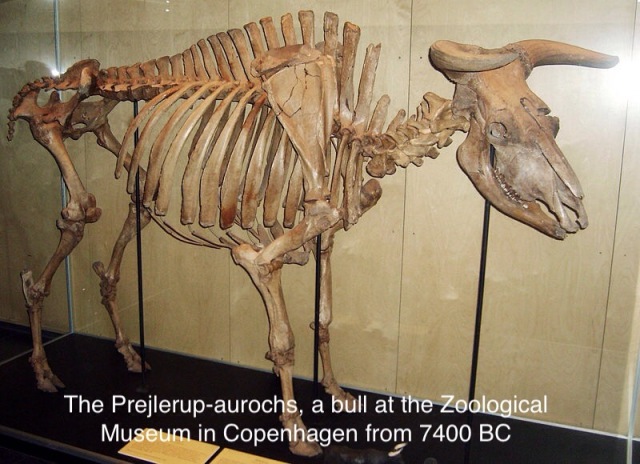 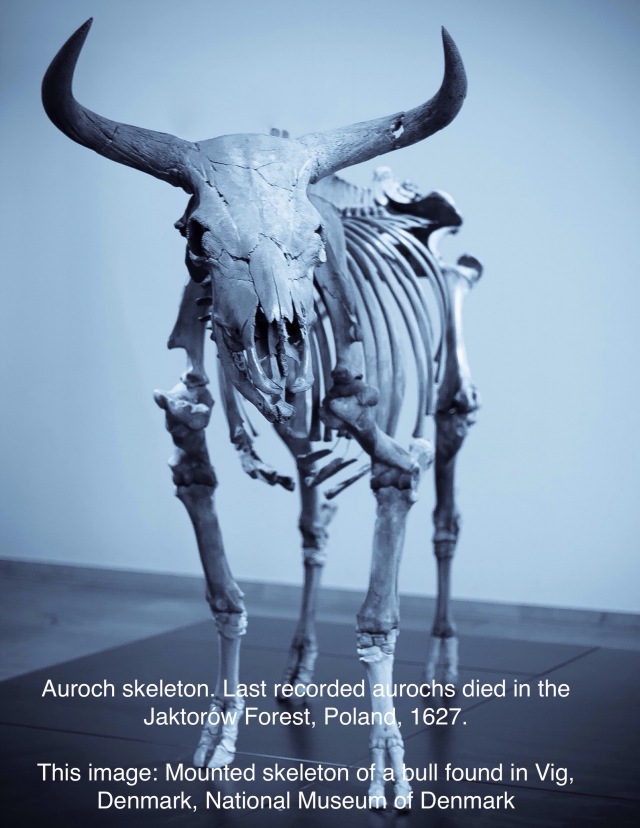 Map of Pleistocene World, here showing the climate only 18000 years ago

During the Pleistocene, the aurochs migrated west into the Middle East (western Asia), as well as to the east. They reached Europe about 270,000 years ago.

Image of megafauna in Britain

The South Asian domestic cattle, or zebu, descended from Indian aurochs at the edge of the Thar Desert; the zebu is resistant to drought. Domestic yak, gayal, and Bali cattle do not descend from aurochs. 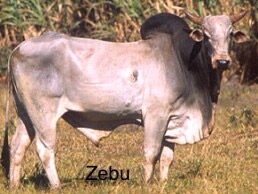 Zebu cattle, which originated in India, are sometimes known as a separate species, Bos indicus. However, current taxonomy recognizes zebu cattle as only a type of Bos taurus. Zebu cattle are characterized by a hump over the shoulder, drooping ears, and large dewlaps. They are well-adapted to arid, tropical climates and are especially resistant to the effects of heat, parasitic insects, and ticks. (Nowak, 1997)

Zebu cattle originated in Southwest Asia and their descendants were non-humped, they have evolved from three breeds of Indian cattle. The Guzerat, Nelore and the Gir had most influence over Zebu breeding. Zebu cattle are humped and belong to the Bos primigenius species of cattle. They were taken to Africa at an early date and within the last 100 years, have been exported to Brazil and the US.  See http://www.thecattlesite.com/breeds/beef/76/zebu/

The emergence of bison was understood by those who created the cave paintings. The part aurochs played is shown below.

The European bison (Bison bonasus), also known as wisent (/ˈviːzənt/ or /ˈwiːzənt/) or the European wood bison, is a Eurasian species of bison. It is one of two extant species of bison, alongside the American bison. Three subspecies existed in the recent past, but only one, the nominate subspecies (B. b. bonasus) survives today. 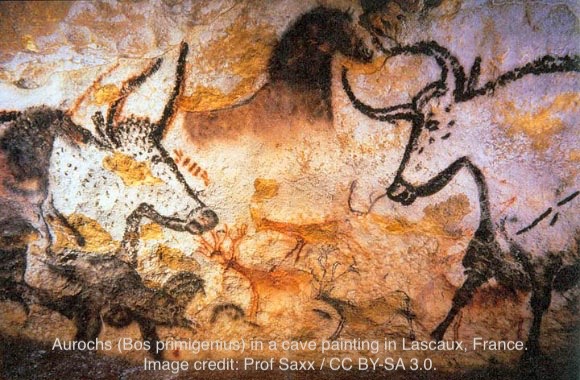 “The nuclear DNA showed our Higgs bison was a hybrid – a cross between a female Aurochs, the extinct wild ancestor of modern cattle, and a male Steppe bison. We dated this hybridisation to more than 120,000 years ago.

Interestingly, this ancestry was the same for modern European bison, and even though the mitochondial DNA looked different (probably due to the recent population bottleneck), the Higgs bison was revealed as the ancestor of the wisent.” https://theconversation.com/how-we-discovered-the-higgs-bison-hiding-in-plain-sight-in-ancient-cave-art-67231

• DNA confirms that aurochs were much more abundantly available in Neolithic China.

• Many aurochs remains may have been mistakenly identified as Bison exiguous.

• All aurochs belong to Haplogroup C and no direct contribution to modern cattle.

• DNA identified one of the earliest Bos taurus remains in China.

Like most domestic animals, Bos taurus (domestic cow) is currently found throughout much of the world. The wild ancestors of cows were native to northern Africa, Europe, and southern Asia. (Nowak, 1997)

Domestic cows are social animals and live in groups called herds. Each herd is led by a dominant male who is the sole male to mate with the rest of the females. (Hinshaw, 1993; Huffman, January 1st, 2000; Walker, et al., 1975) see https://animaldiversity.org/accounts/Bos_taurus/ 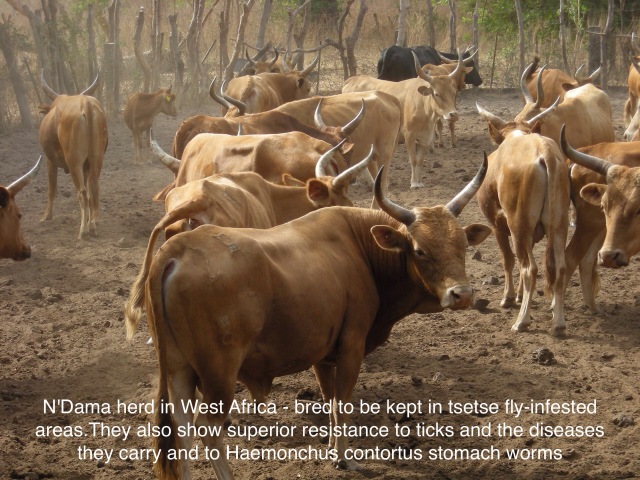 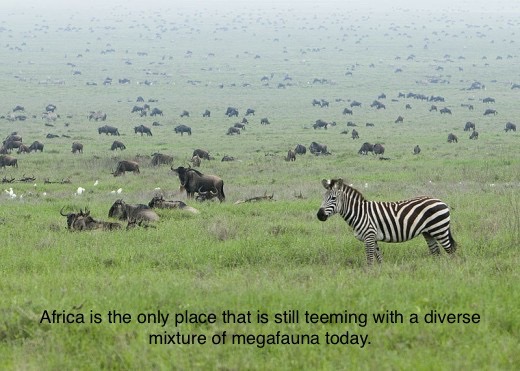 Three wild subspecies of aurochs are recognised. Only the Eurasian subspecies survived until recent times.

In modern cattle, numerous breeds share characteristics of the aurochs, such as a dark colour in the bulls with a light eel stripe along the back (the cows being lighter), or a typical aurochs-like horn shape.

Five species of wild cattle have been domesticated approximately in the last 10500 years (Helmer et al. 2005)

The first domestic cattle was a form with long horns, a phenotype that is still common in several British, French, Mediterranean and African breeds.

This long horn type developed in Africa and is today associated with Lake Victoria, the source of the Nile.

But during the late Pleistocene North Africa’s Sahara Desert flourished with lush landscapes, teemed with wildlife and millions of people lived there. This was a period of 5,000 years (roughly 4,000 to 9,000 years ago). But the climate changed again and was once more desert.

The Rock Art testifies to the daily observance of aurochs who roamed the landscape along with other bovines such as the huge prehistoric buffalo (Bubalus antiquus) and the prehistoric ox, both now long extinct. The aurochs was once common across North Africa and indeed across large parts of Asia and Europe. In Africa it seems to have disappeared around 4,000 years ago when the Sahara dried up, but in Asia it lingered on until the 1st millennium BCE. 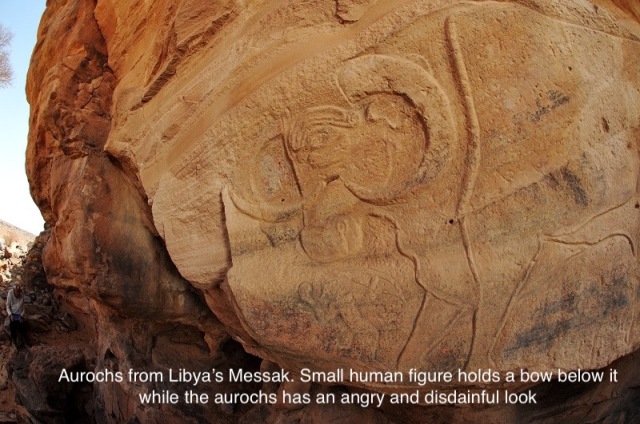 Retired, living in the Scottish Borders after living most of my life in cities in England. I can now indulge my interest in all aspects of living close to nature in a wild landscape. I live on what was once the Iapetus Ocean which took millions of years to travel from the Southern Hemisphere to here in the Northern Hemisphere. That set me thinking and questioning and seeking answers. In 1998 I co-wrote Millennium Countdown (US)/ A Business Guide to the Year 2000 (UK) see https://www.abebooks.co.uk/products/isbn/9780749427917
View all posts by borderslynn →
This entry was posted in anthropocene and tagged Africa, aurochs, cave paintings, China, Eurasia, Europe, herds, India, long horned cattle, megafauna, rock art, steppe bison, wisent, zebu. Bookmark the permalink.

1 Response to The Significance of Aurochs